It’s no wonder people love dahlias. A floral arrangers' dream, prolific, easy-to-grow dahlias come in a bewitching array of size, form, and color, offering armfuls of blooms weekly throughout the summer and into fall. They are likewise generous in growth, with one tuber multiplying to 10-20 in a season, making them a high-value crop. Classified in the Asteraceae family, they are native to Mexico. Their edible tubers were cultivated by indigenous peoples for centuries before being “discovered” by Spanish explorers in the 16th century. They will happily live for years in well-drained, sunny sites in USDA zones 8-10. The plants go dormant in the winter after the first frost. Gardeners living in zones 3-7 can dig the tubers in fall and store them until spring. Plants range in size from dwarf bedding cultivars one foot tall to a species of Dahlia called imperialis, which can reach 18 feet. Blooms on the “dinner-plate” varieties can be one foot across. There are numerous styles of bloom: single-blossom types adored by pollinators, luscious doubles, waterlily, cactus and more. 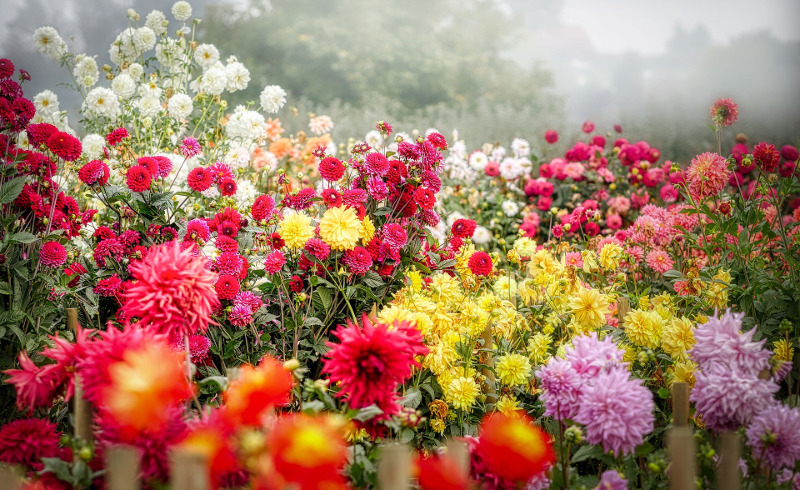 Choose the sunniest spot with a minimum of six hours of direct sun. The best time for planting is in spring when all danger of frost is past, and the soil has warmed to about 50 degrees. To get a head start, you can start tubers inside in pots four to six weeks before your last frost date. To overwinter dahlias outdoors in zones 8-11, soil must be well-drained. Avoid overly wet soil in winter and spring. Containers or raised beds will help if local soil is too moisture retentive. They prefer loamy or sandy fertile soil. Add compost or aged manure, and an all-purpose fertilizer. Dig a hole six inches deep, setting the tuber so the stem is facing up about one to two inches deep. Until sprouts appear, usually within a month, water only if very dry. Large dahlias with heavy flowers may need staking or caging – do this soon after planting time to avoid damaging the tubers.

Dahlias are a “just-right” kind of plant, meaning they want the just-right amount of moisture. The tubers retain water, so the plants are somewhat drought-tolerant, but at the same time, water is needed to promote consistent growth for all those leaves, shoots, and buds. Just after planting, until leaves emerge, water only when absolutely necessary, like the soil is super-dry. Thereafter, water consistently between one to two inches a week, allowing the soil to dry slightly in between sessions. When they are not allowed to dry out, especially when young, they can rot. 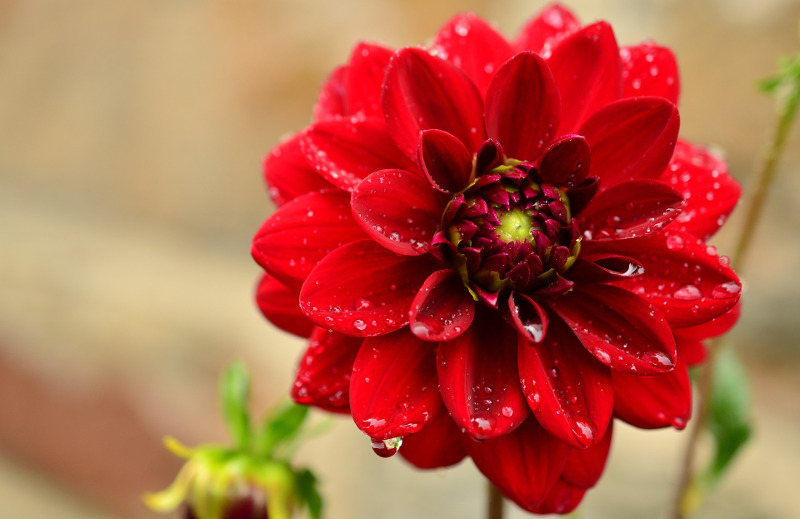 With so much prodigious growth to make and flowers to pump out, dahlias need plenty of consistent nutrition for optimal performance. Soil can be amended in fall if overwintering, or at planting time in colder zones, with manure that is well-aged and/or compost. Start each season with a balanced slow-release organic fertilizer for flowering plants. Optionally you can boost flowering with fast-acting liquid fertilizer applied every two weeks. Repeat through the growing season, slowing down in fall.

Dahlias need little pruning - other than cutting bouquets for yourself and your friends which will encourage more flowers. You can jumpstart the process a little with two early pinches. When plants reach 10” tall, you can pinch the growing tips off to encourage bushier growth and more flowers. This will delay the flowering time slightly. Repeat when the first flower buds appear. You may also deadhead the spent flowers at any time of the growing season, so the plants put their energy towards new growth and blooms. When cut down by a frost, remove any blackened foliage and prepare for winter depending on your hardiness zone. 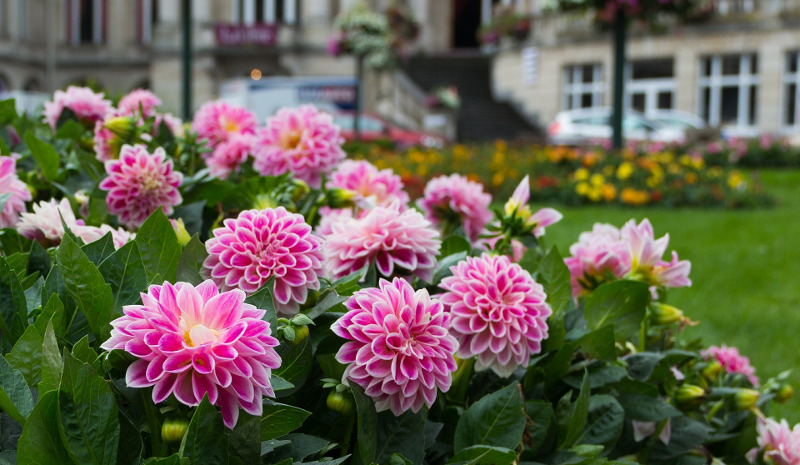 Caring For Dahlias in Pots

Dahlias make great container subjects. They can be mixed with others but prefer plenty of elbow room to really thrive. The largest dinnerplate and decorative varieties need a hefty pot - about 18” x 18” minimum. Small border dahlias do well in a 12” X 12” pot. They will perform the best with consistent fertilizer, either a slow-release early in the season and ideally, a liquid formula added every two weeks during the growing season. Water deeply and thoroughly to saturate the soil, allowing it to dry to about one inch deep before watering. If wintering outside in zones 7-8, mulch, put the pot in a sunny protected spot against a wall, consider wrapping the pot with permeable fabric like burlap.

If overwintering in-ground in zones 8-11: if a frost hits, remove any damaged foliage and cut stems to within four inches of the ground. Mulching will keep the ground warmer, but also wetter, which is not good for the dormant tubers, so be aware of your climate needs. If growing as an annual, pull up the tuber and compost it.

After frost, trim the dahlia stem to four inches. Wait a week to let the tubers sprout “eyes”, which are the beginnings of next year’s sprouts. Dig carefully about 12” from the stem, gently lift the clump of tubers, brush off, and label a tuber with a permanent marker or tie a label to it. Let the clump air dry for several days sheltered from rain and frost. Trim stems to one inch.

Tuber clumps can be divided now or in spring. To divide, use a sharp knife and cut to retain some stem (neck) tissue and at least one eye, or growth point. For individual tubers or clumps, storage is the same. Place tubers in pots, crates, or paper bags filled with sand, sawdust, or vermiculite. Layer them so the tubers don’t touch. Store in a cool, dark spot about 40-50 degrees F, and check each month. Air circulation is important, so open bins and paper bags are better than plastic or solid metal. Overly humid conditions will cause rotting, dry ones can make them wrinkled and desiccated.

Why Are My Dahlias Leaves Yellow?

Yellowing leaves on dahlias are most commonly caused by tubers that are rotting and therefore cannot any longer support or encourage healthy growth of the plant and/or smut, a fungal disease. Yellowing dahlia leaves can also be caused by leafhoppers, spider mites, or aphids. Damage can be minimized or stopped altogether by vigorously washing the leaves with water or treating them with neem oil.

Dahlias are not drought tolerant, preferring a consistent water supply, though they also don't like soggy feet. Watering them slowly and deeply a couple of times a week, and doing your best to keep the foliage dry, if you're watering by hand is advisable while drip irrigation, if possible, is best practice.

The more sun dahlias get, the more they'll bloom. These are sun lovers for sure and require a minimum of six hours of sunlight a day.

Dahlias are tubers, and each mother tuber can produce anywhere from 5 to 20 additional tubers each year. You can divide the tubers and transplant them in the colder months. Each tuber can create a flower identical to the original.

Do Dahlias Come Back Every Year?

Dahlias are tender perennials. In colder regions, foliage can be cut back to within a few inches of the ground after they've blackened, and the tubers can be dug up and overwintered.

When Is Dahlia Flower Season?

Have a question about Dahlias? Fill out the form below and we will try and get back to your question as soon as possible. We may even feature your question on this article to help other gardeners!