Forsythia is a genus in the Oleacea family, with the olive tree. It comprises 10 species native to eastern Asia, and 1 to southeastern Europe. The two most popular garden plants are F. suspensa and F. viridissima. They are deciduous shrubs with gray-brown bark, blooming in early spring with pea-type flowers in a vivid lemon yellow that thrive in full or part sun in USDA zones 5-9. The latter is upright, wonderful for fast-growing, easy-care hedgerows and back-of-the-border color, the former is more lax, and looks great softening the edge of a wall or hillside. F. x intermedia is a cross of the two species, several cultivars of which have won the Royal Horticultural Society’s Award of Garden Merit. There are dwarf selections, but many grow as large as 12’ by 10,’ and last for up to 50 years. 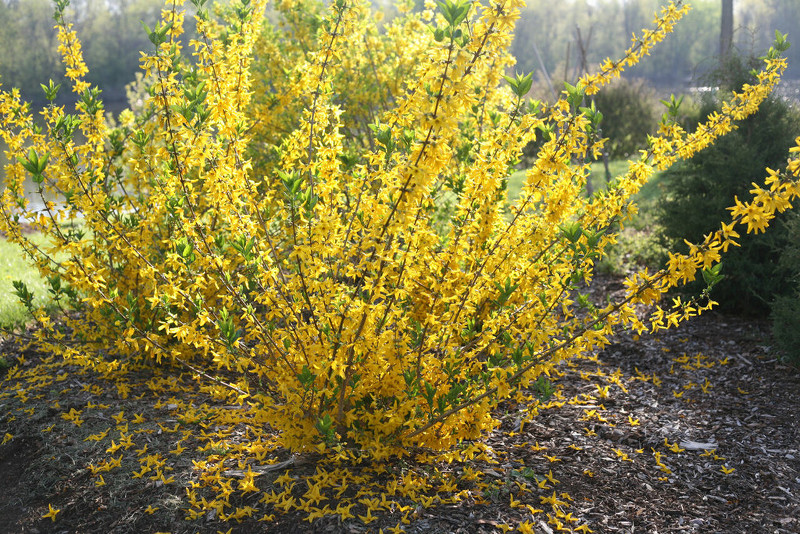 The ideal site will be roomy, allowing the shrub to reach full size, in full or part sun with well-drained soil high in organic matter. They are adaptable to slightly alkaline or acidic soil. Flowering is best in sun. If planting a seasonal hedge, plant seven feet apart. Prepare a hole as deep as the root ball and twice as wide. Water very well the first two years as the roots become established, after which the plants can take some drought, but deep watering 1-2 times a week will be appreciated. You will appreciate some evergreens nearby in your design to add winter interest and contrast to the forsythia’s relaxed chaos.

Forsythia thrive with consistent moisture. Water very well the first two years as the roots become established, after which the plants can take some drought. Nonetheless, deep watering one to two times a week for a total of two inches deep will be appreciated. 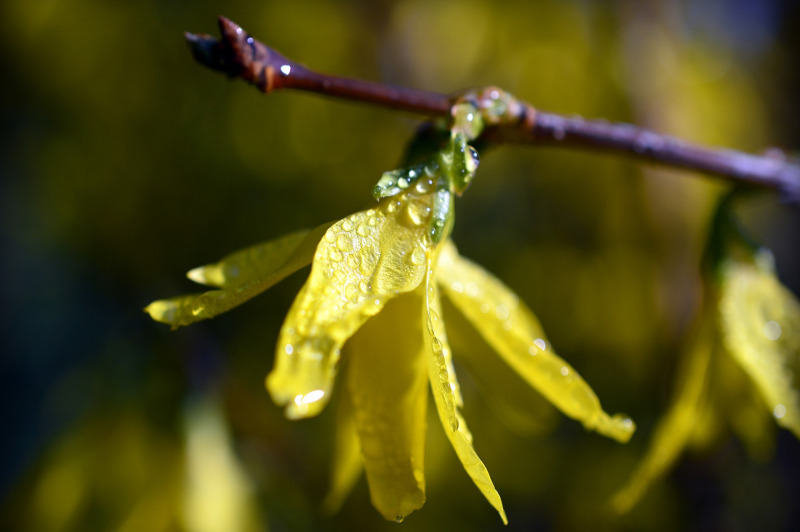 Forsythia will bloom and grow best with a balanced fertilizer formulated for woody plants. Apply a slow-release fertilizer in late winter before flowering begins. Not much else is needed in the way of fertilizing. If your soil is poor, amend with compost in the fall.

Forsythia’s lovely, somewhat wild, natural form deserves to be given elbow room. Pruning it into gumdrops robs it of its easy grace – and if done at the wrong time of year, can rob you of its flowers. The best time to prune is right after flowering, before buds form. The ideal way to prune is to remove about one third of the oldest/tallest canes, pruning them to the base, yearly.

Caring For Forsythia in Pots

In a full sun location, choose an appropriately sized variety and pot, ideally a dwarf type, and fill it with high-quality potting mix rich in organic matter. Water very well the first two years. Fertilize lightly the first year, then use a slow-release fertilizer in spring, followed by liquid fertilizer every two months in the growing season. Prune lightly right after flowering to shape. Mulch to conserve moisture. Protect your pot over winter if in the colder range of it’s hardiness zone. 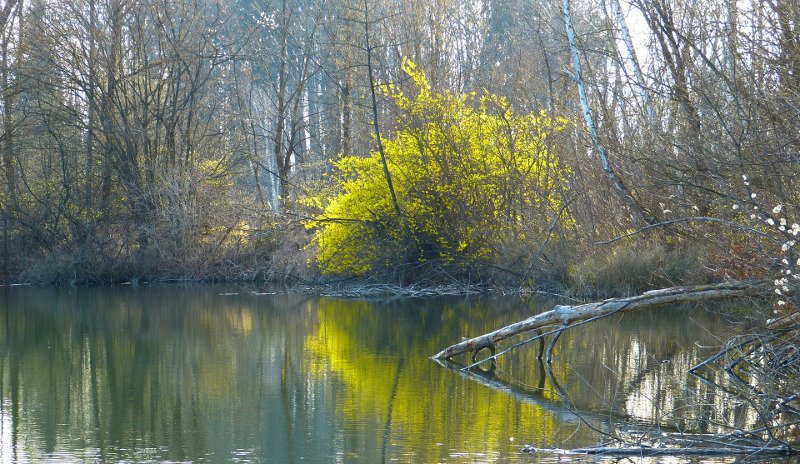 Amend soil as needed in fall with organic matter such as compost. Mulch to conserve moisture. Protect your pot over winter by wrapping it with frost cloth if in the colder range of its hardiness zone. In late winter, apply slow-release fertilizer made for woody plants. Here’s a magic trick to get a jump on the year’s flowers: cut a few branches as they are just showing buds to force indoors in warm water, and you’ll get to bring spring early!

Forsythia is not listed on the United States Department of Agriculture's invasive plant list, but it does exhibit some of the same habits of some other plants that are. For example, if the branches are allowed to touch the ground, they can root and start a new plant. However, they're not aggressive and will not crowd out native species. A bonus is that you can cut off several branches and stand them in a vase of water to force some winter bloom color in your home!

Forsythia is drought tolerant, as well as deer resistant, pollution tolerant, and they don't mind salty conditions, either. They also tend to adapt very well to any soil type.

Forsythia does best and will flower most profusely when planted in full sun, at least 6 hours of direct sunlight. That said, they can do very well in partial shade, though they'll flower less.

What Size Does Forsythia Get?

There are many kinds of forsythias. Some varieties are only 1.5 feet high and wide, while others can reach up to 10 feet high and up to 12 feet in width.

What Is The Forsythia Growth Of Rate?

Forsythias are fast growers, some varieties can grow up to 2 feet annually.

Have a question about Forsythia? Fill out the form below and we will try and get back to your question as soon as possible. We may even feature your question on this article to help other gardeners!