I have to admire the tomato and tobacco hornworms, even if they give me the creeps to the point that I make unflattering girlie noises when I see them, and especially when I pick them off my tomato plants. Talk about adaptation at its finest! The tomato and tobacco hornworms (Manduca quinquemaculata and M. sexta) can grow up to four inches long, but still hide from unsuspecting gardeners as they nearly destroy a tomato plant’s foliage. 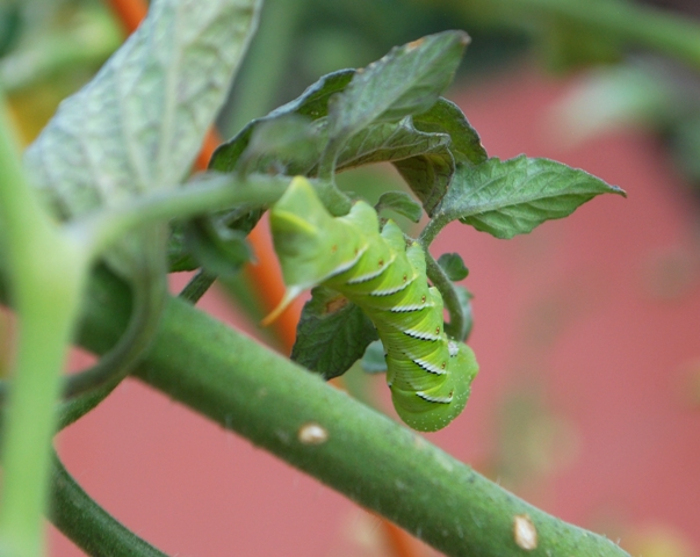 This tobacco hornworm clings to the underside of a tomato plant branch, a typical hiding spot for the caterpillars. You can see the horn on its tail.

Both hornworms are larvae of the adult sphinx moth, often called the hummingbird moth because the large insect hovers near flowers like a hummingbird, only near dawn and dusk. Both have three legs in the front and several other “prolegs” that help them climb and grab onto branches (and your gloves when you pick them!). A tiny spindle on the tail gives them their horn name, but the caterpillars don’t sting. The tomato hornworm has eight, diagonal stripes on each side that are white against its adult-sized bright green background. Tobacco hornworms have only seven stripes and a slightly curved and red horn. 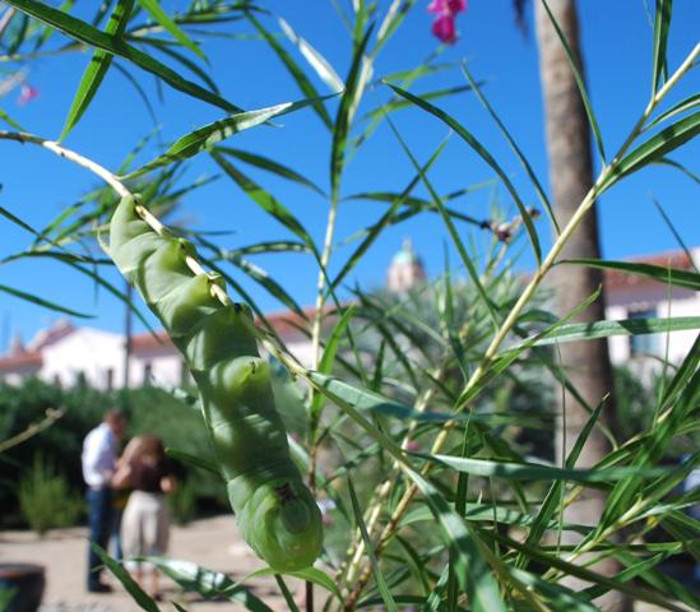 Here’s a shot of what appears to be a giant hornworm on a Desert willow (Chilopsis linearis), which is not a member of the Solanaceae family, a family that includes tomatoes, tobacco plants and eggplants. An astute visitor (see the comment below) informed me that this is the Manduca rustica, the only Manduca that thrives on non-solanaceous plants. I found out it also prefers lower elevations, which would explain the Tucson spotting.

The chewing mouthparts are on the head, and they can do some serious damage. In fact, the name “Manduca” translates to glutton. Strike two against the hornworm. The first one I found this season had sawed through three gorgeous green tomatoes. I’m sorry I didn’t take a photo, but I was too mad and on the hunt. I never found the perpetrator, and believe that its final gluttonous act might have been at the end of the larvae’s mature stage. These were pretty large gaps in the tomatoes, about as big around as my ring finger and straight across the tomato, sort of like the hornworm rode a slip-and-slide through the fruit. Plus, we had missing leaves on a few branches. I guess hornworms stop eating right before they molt, emptying all that yummy green tomato and foliage, which is another way to spot them on your plants. 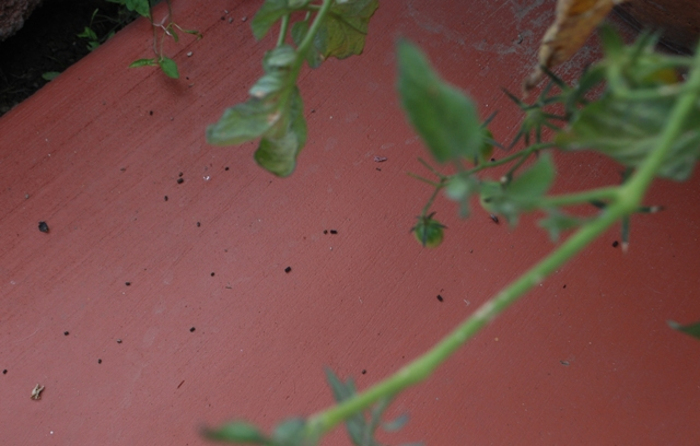 Signs of a hornworm buffet and another great reason to grow tomatoes in containers. It was easy to spot the numerous hornworm droppings on the patio.

The best way to control hornworms on your tomatoes is observation. Look for branches with stripped leaves, usually toward the outer ends. The best time to find the hornworms, however, is early and late in the day, when it’s cooler and the light is low. They eat then, but move to the center of the plant when the sun is out, presumably to rest, digest and hide from you! It’s also a lot easier to spot them when it’s shady, with no sun in your eyes. I found four or five on this grape tomato plant just before sunset the other night. 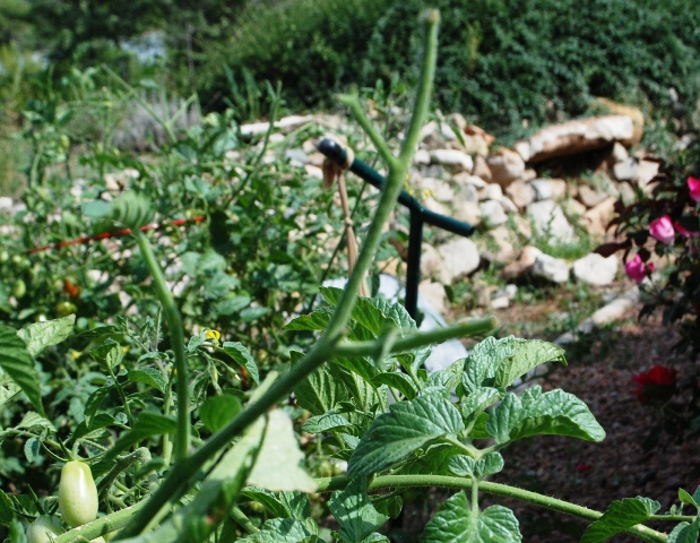 Aside from droppings on leaves or ground and patio below, hornworms typically strip entire branches.

Be ready when you pick the worm off to either drop it into a bucket of water, or a combination of soap and water. Or if you prefer, cut the worm in half with shears. I actually started to feel sorry for one that clung to my glove, and then I remembered strike two. And if I had not pulled those four off of my grape tomato plant, there would be nothing left of it today. It’s also important to consider the Manduca life cycle – every hornworm you leave on a plant wanders around the garden and buries itself into your soil to become a pupa. The pupae lay second generation eggs in your soil to restart the cycle!

After a season with a particularly bad hornworm problem, it’s recommended that you pull up all tomato, eggplant and pepper plants to expose possible pupae. If you have chickens that can graze the soil after turning it, even better! If the problem is really bad, organic Bacillus thuringiensis can work as a biological control.

For all I will do to control hornworms, I still admire them as an example of adapted nature. They usually win – there is no way to find all of them in your garden, mostly because they are masters of disguise, looking just like a tomato branch or curled leaf. They eat well, undergo total metamorphosis and those that make it past vigilant gardeners or farmers get to live the dream so many of us have – they can fly. Over gardens, hovering by flowers. I still don’t feel bad about picking them off my tomatoes, though.