Nandina, known by the scientific name Nandina domestica, or the common names Sacred Bamboo and Heavenly Bamboo, is not a bamboo at all. It’s in the same family as Barberry, the Berberidaceae family, and is toxic to many animals if ingested, especially at high doses. It is dangerous to cows, horses, dogs, cats, and birds. Cows and other ruminants (cattle, sheep, antelopes, deer, giraffes, and their relatives) are at higher risk because they process the poisonous compounds faster, and certain birds, like cedar waxwings which gorge on the autumn berries, are in great danger.

The ASPCA does not list it as toxic to humans, even children but it is listed as category 4 Toxicity (“generally considered non-toxic to humans”). However, Colorado State University does list Nandina as poisonous to humans though. So it is better to be safe than sorry.

The plant contains a compound called Cyanogenic glycosides, which decomposes into cyanide. Some cultivars are higher in the compound than others, and it can increase the longer the berries are on the plant for instance.

All parts are toxic. It can be fatal to many animals in high enough doses, and more quickly for ruminants. Call a veterinarian right away if you believe your pet or livestock has ingested Nandina. 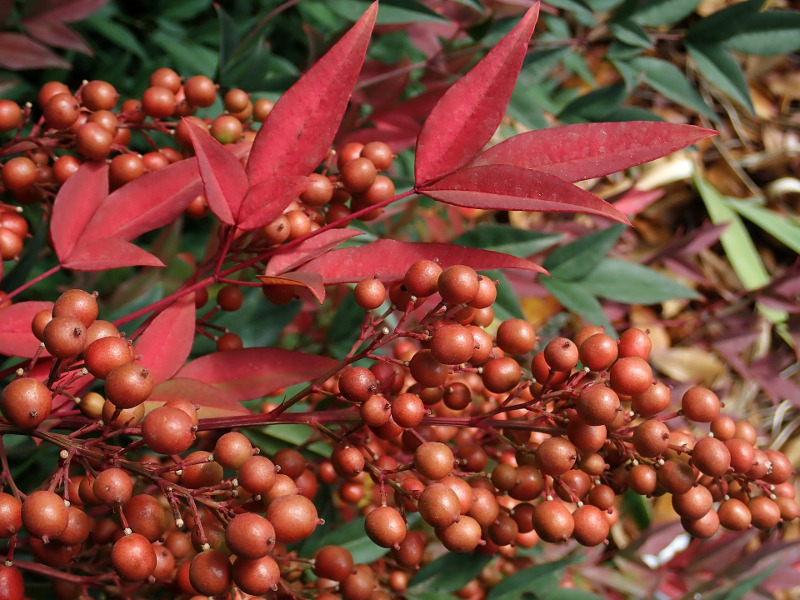 Are Nandina Poisonous to Children?

Nandina are considered to be Toxicity Category 4, described as “generally considered non-toxic to humans”. However, since all parts are toxic, and the red winter berries are tempting, it would be wise, if you have young children, either to remove the shrub or if that is not possible, to at least trim off all the flowers before berries can set, and put a barrier around the shrub.

Are Nandina Poisonous to Dogs?

Eating any part of the Nandina plant, in sufficient quantity, can kill dogs or puppies quickly if untreated.

Are Nandina Poisonous to Cats?

Nandina is potentially fatal to adult cats and kittens in high enough quantities. Typically the bitter taste keeps cats from eating large quantities, but symptoms can advance quickly, so if you have seen your cat eat Nandina, rush them to the veterinarian.

Are Nandina Poisonous to Other Animals?

Livestock, especially ruminants like cows and goats, as well as horses, dogs, cats, and birds are in danger from sickness and possibly death if they eat any part of the Nandina plant. The berries are particularly attractive and should be pruned off if the plants cannot be fenced off or removed near animals.

Always check with your doctor or veterinarian for guidance if you suspect Nandina poisoning. Here are some common symptoms to look out for:

As a preventative measure to keep children and animals safe, you can remove flowers and the resultant berries which are the most likely to be eaten, or use physical barriers such as decorative fencing. There are also animal deterrent products on the market that can help prevent animals from chewing on plants.

If something were to happen to your furry friend, and you suspect that they are suffering from Nandina poisoning, there is a poison control hotline to call for 24/7 vet advice. It is called the Pet Poison Hotline, and their phone number is (855) 764-7661.