Nandina domestica, commonly known as heavenly bamboo, is a species of flowering plant in the Berberidaceae family. Heavenly bamboo or sacred bamboo is native to Asia & Japan. Nandina is widely grown in gardens as an ornamental plant with bright-red foliage in the fall and attractive new growth in the spring. Despite its name, nandina is not actually a bamboo at all. It is a mounded evergreen shrub with glossy leaves. The flowers are white in early summer and held above the foliage. Berries are produced in the fall and often last throughout the winter. Nandina can grow anywhere from 2 to 4 feet tall in a mounded habit. Plant in a location that gets full sun to partial shade, and well-drained soil. Nandina is great in garden planters, in mass plantings or as a garden border. These are also great for wildlife and pollinators. 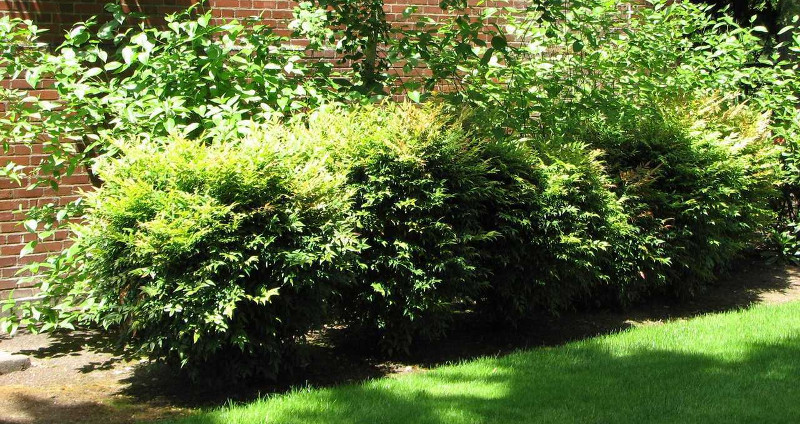 When planting Nandina shrubs, choose a site with full sun or some light afternoon shade. This will help the foliage look its best. Nandina bushes grow in most types of soils, but grow best in soil with a high humus content. This bush can be planted any time of year except midsummer, although spring and autumn provide the best conditions to establish new roots. Space the shrubs according to their mature size. Plant Nandina in holes that are twice as wide but the same depth as their original container. Water well after planting.

Once established, Nandina plants are drought tolerant. During the first year after planting, Nandinas require moisture until the root system has been established. Careful of overwatering, as soggy soil can cause root rot or diseases. It is best to give your plant a deep soaking less frequently, allowing the soil to dry out a bit before watering again. This is much better than splashing just a little water on the plants every day. If you see new leaves wilting or turning pale during drought conditions, this could be a sign your plants could use a good deep soaking. 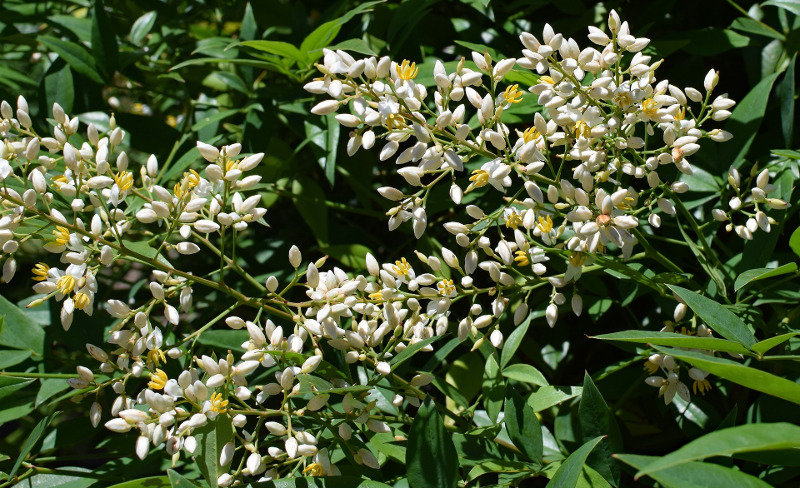 Nandina will benefit from a yearly feeding of a slow-release fertilizer. Fertilizing your plant helps preserve the vitality of the plant. It also aids in blooming. This can be done each spring. Nandinas do not have an extensive root system, so it is best to apply the fertilizer at the base of the plant, ensuring that it does not touch the trunk of the plant. Water deeply after application to prevent the roots from burning, as this could be very damaging to the plant.

Nandina Shrubs should be pruned annually. This plant is a cane producing shrub. It can easily produce unsightly and invasive side stems. These particular stems can be pruned any time of the year. In the fall, we suggest thinning out older stems to produce a denser plant. Dwarf varieties will not need as much pruning, but can be pruned to keep a desired shape. With other varieties of this shrub, tall stems can be cut to reduce the height of the plant. The cut stems can last for days and are popular in floral arrangements. 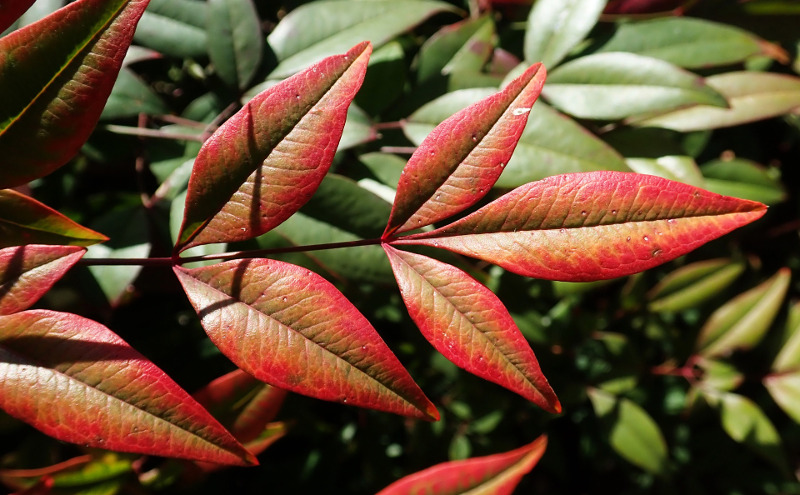 Caring For Nandina Shrubs in Pots

Nandina are great for use in container gardens. When growing in pots they appreciate a moist but well-drained soil. Constantly soggy soil can and often will cause root rot or other harmful plant diseases. Make sure that the container you choose has drainage holes. Select a container that is large enough to allow for 2 to 3 years of growth before you need to move up to a larger size container. This means that your planting pot would be 6 inches in width (or more) than the root ball of your plant. If you'll be growing other plants in the same container you will want to choose an even larger container.

Nandinas are evergreen plants and grow well throughout all four seasons. When planted in its correct USDA hardiness zone, damage from the cold is rare. This plant does not require fertilizing during the winter. This easy to care for shrub needs minimal watering during the cold weather season. If you notice the leaves begin to wilt, then it is time to water the plant. A  2-4 inch layer of mulch around the base of the plant can help to protect the roots from the cold temperature. If you find that you need to prune your shrub, it can be done in late winter. 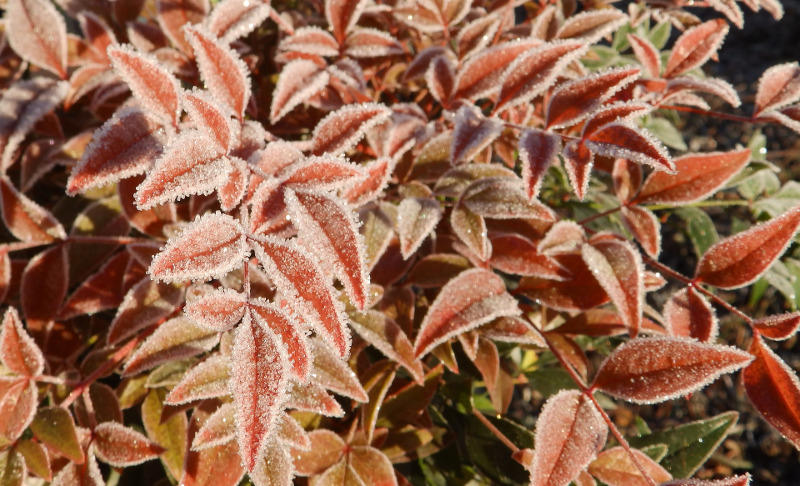 Why Is My Nandina Not Growing?

Nandina is slow growing shrubs and prefers well-draining soil. They don't like soggy ground and too wet roots may be cause them not to grow or even die back. They're very drought tolerant after they're established. These deer-resistant shrubs prefer humus-rich soil, with pH levels between 3.7 and 6.4, and also do not do well in sandy soil.

Nandina, also known as Heavenly Bamboo, is considered invasive (meaning they can have a tendency to spread aggressively and crowd out native species, in many parts of the country, including Texas and Florida.

While Nandina is adaptable to many kinds of soil, they prefer a humus-rich environment doing best in soils that a moderately acidic to mildly alkaline.

Nandinas can do well in partial shade to full sun, as long as they have soil that drains well.

What Is The Growth Rate For Nandina?

Of course, this depends on many factors (soil quality, climate, watering, etc) a nandina can grow up to 2 feet per year.

Why Does Nandina Leave Turning Brown And Yellow?

Yellowing leaves is a fairly common problem for nandinas and is most often caused by an iron deficiency. This can be remedied by adding organic material to the soil or increasing the pH level of the soil. Nandina with browning leaves can be caused by bacterial leaf scorch for which there is no cure, but mulching and adequate watering can help slow the progression of the disease and still promote vigor for the plant.

Have a question about Nandina? Fill out the form below and we will try and get back to your question as soon as possible. We may even feature your question on this article to help other gardeners!