Shade garden stars with delicate textures belying their tough constitutions, ferns pop up in the fossil record about 360 million years ago, but most of the ones we know today appeared much more recently - about 145 million years ago. In the Polypodiopsida group, ferns are vascular plants that reproduce by spores, rather than seeds or flowers. Coiled fiddleheads unfurl into dissected leaves of varying levels of froth, from lacy Maidenhair to bold Harts’ Tongue. Some are a hands’ breadth in height, and others, like Tasmanian tree fern, can top 20 feet. Ferns do a lot for humans - some offer edible fiddleheads, some remove pollutants from the atmosphere or soil, and some help feed millions by fixing nitrogen in rice paddies. In hardiness, they range from USDA zones 2-10, though most fall in the 4-8 range. 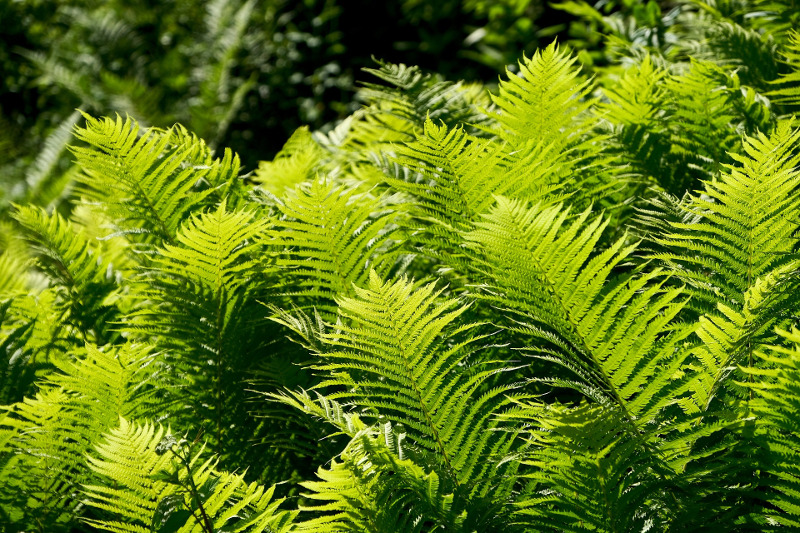 Choose a site whose soil is high in organic matter with consistent moisture. As a group, ferns thrive in full to partial shade. Lady fern (Athyrium filix-femina) can take more sun in colder regions with extra watering. The general range of preferred pH is 4 to 7. Dig a hole twice as wide and as deep as the root ball. There are both mat-forming ferns, such as Adiantum, Athyrium, and Dryopteris, and crown-forming ferns like Matteuccia, Osmunda, and Polystichum. When planting bare-root, cover the buds and old frond bases of mat-formers with an inch of soil, while crown-formers should be planted with the growing tips just cresting the surface. Water in well. Mulch to retain moisture if needed.

Ferns prefer moist, but not soggy, soils. Water regularly the first two years while getting established, especially in hot or dry spells. Do not allow the soil to become completely dry. Mulch to retain moisture if needed. Composted leaves or pine needles make good feeding mulches. Lay down approximately two inches of mulch.

Ferns are notoriously sensitive to fertilizers. Take care not to overdo it, especially with young plants. Wait until new growth is emerging before fertilizing. Choose a slow-release fertilizer. While the majority of ferns grow in a range of soils, from pH ranging from 4 to 8, Maidenhair fern (Adiantum) prefers an alkaline soil of 7 to 8, though it can grow in lower pH levels. If a soil test prescribes a pH change, amend soil accordingly in fall. 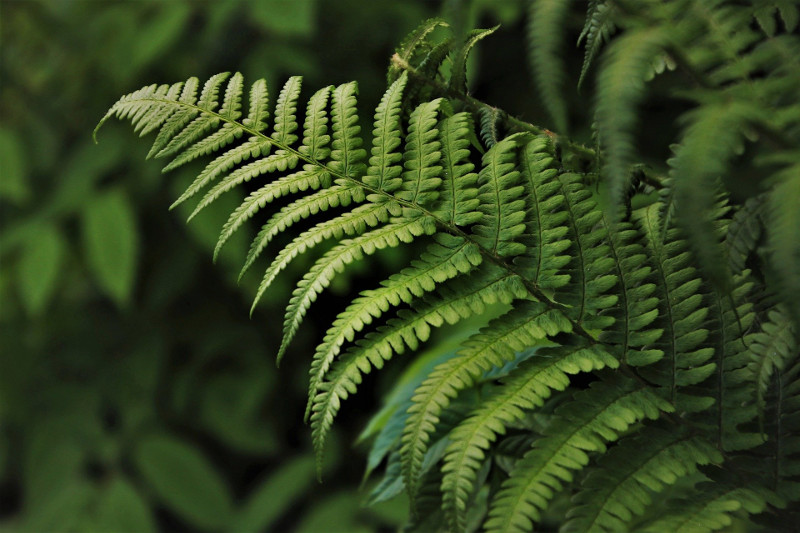 The type of pruning you’ll need depends on your fern: is it evergreen or deciduous? Deciduous ferns can be cut back to soil level annually. The best time for this is right after frost has killed the top growth, although it can also be done in very early spring before the new growth emerges. For evergreen ferns, trim back the oldest, brown fronds in late winter to make room for fresh growth.

Caring For Ferns in Pots

Ferns make great pot subjects because of their relatively shallow root systems. Choose one that suits your climate and find a site in partial to full shade. Fill the pot with high-quality potting mix high in organic matter. Plant containerized plants at the same level as their nursery pot. Plant bare-root specimens one-inch below the soil for mat-formers (Adiantum, Athyrium, and Dryopteris) and plant crown-forming ferns (Matteuccia, Osmunda, and Polystichum) with the growing tips just cresting the surface. Mulch with organic matter like composted leaves or pine needles to retain moisture. Keep consistently moist. Cut back deciduous ferns after frost to the ground. Trim old growth of evergreen types back in the spring. If your fern is tender in your climate, protect it with frost cloth in fall. Asparagus ferns, often used as summer porch plants, can be brought inside for the winter. They are toxic to pets, however. 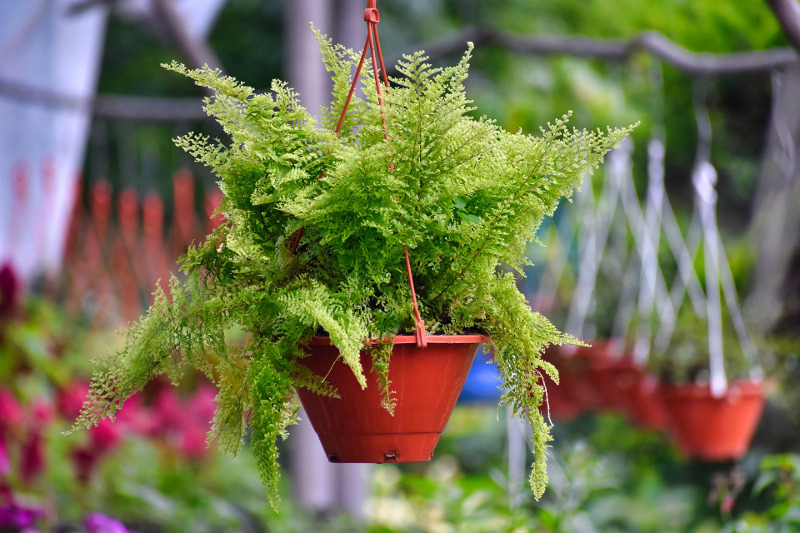 Amend soil in fall with organic matter as needed. For deciduous ferns that die back, cut to the ground after a hard freeze. Mulch to protect roots from heaving out of the ground. Pine needles or composted leaves to a depth of two inches are good choices that will nourish the soil while keeping the roots cool and damp. If growing a fern that is tender in your area, protect the roots by mulching the soil and/or wrapping the plant in frost cloth. Asparagus ferns, often used as summer porch plants, can be brought inside for the winter. 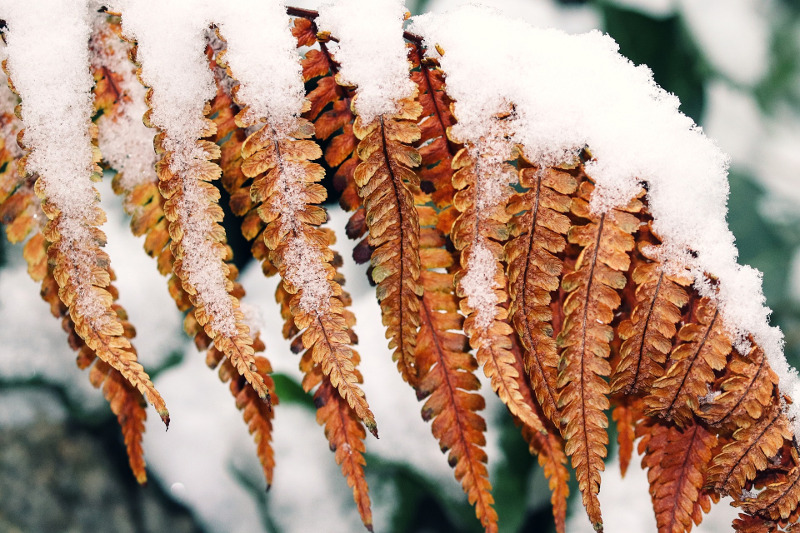 Can Any Ferns Grow In Sun?

Most ferns do best in shady, humid areas, though there are some that can tolerate full sun if they're kept sufficiently watered and protected from the sun during the hottest part of the day, the afternoon.

What Is The Growth Rate Of Ferns?

The majority of ferns are slow-growing and will need several years of growing time before they reach their mature size.

Why Does The Leaves On My Fern Turning Brown?

If the top fronds of your fern are green and the fronds on the bottom are turning brown, that is natural and means your fern is happy and healthy! For most ferns, new growth comes from the center, the top. You can trim those brown fronds off without damaging the plant. If the tips of the fronds are turning brown, your plant likely isn't getting enough water or the humidity level isn't high enough around the plant.

Do Ferns Come Back Every Year?

Ferns are perennials and thrive in wet, shady areas that are often too wet and too shady for most other plants.

Most kinds of ferns spread fairly quickly. When you're planning your garden, be sure to make yourself familiar with all the specs on the ferns you're choosing to be sure you have enough room and will be happy with the spread.

There are several kinds of ferns that are considered to be invasive.

How To Care For Ferns Outside?

To help your ferns thrive outdoors, be sure to keep their soil consistently moist (but not wet, a layer of mulch can help) and acidic, provide plenty of shade with a bit of indirect or dappled sunshine, and lay down a layer of rich, organic compost under that mulch!

Most ferns do better and thrive in consistently moist soil, though there are a few varieties that are drought tolerant.

Have a question about Ferns? Fill out the form below and we will try and get back to your question as soon as possible. We may even feature your question on this article to help other gardeners!