But if your hydrangea is getting much too large (or old), and you simply must prune it, use one of the following methods. 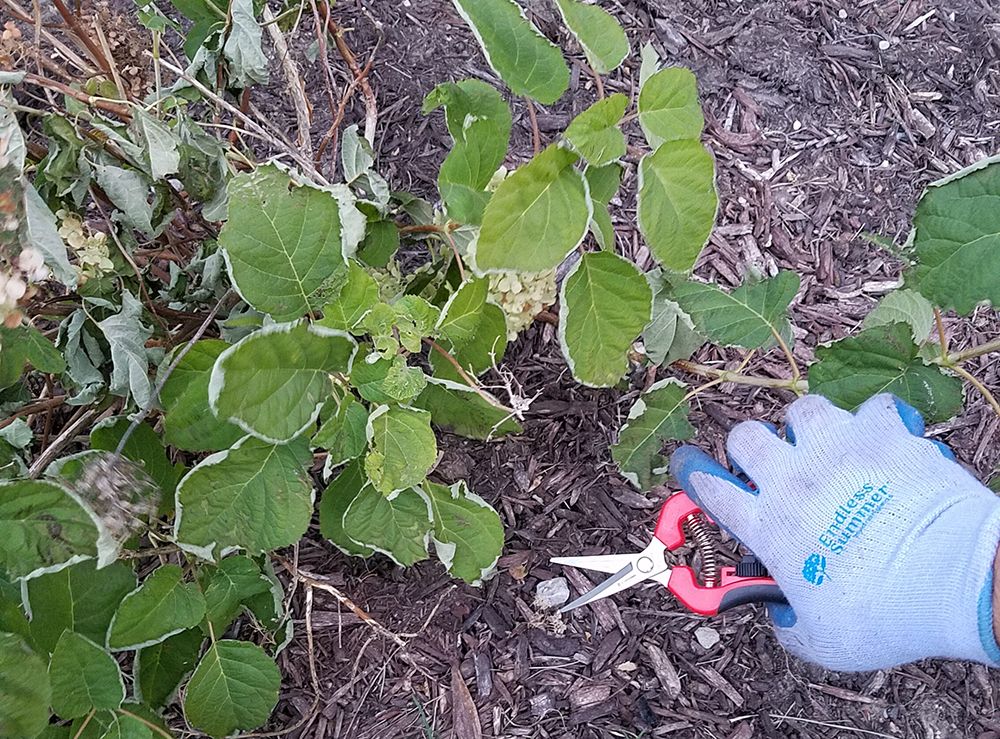 Use Method One if you have mophead or lacecap hydrangeas (these are the only type hydrangeas that are usually blue or pink) or if you have oakleaf hydrangeas (leaves shaped like large oak leaves, white blooms).

Use Method Two if you have paniculatas (PeeGees) or 'Annabelle' (arborescens). Both PeeGee and smooth hydrangeas bloom white.

Before pruning, be sure to know what type of hydrangea you have.

When Cutting Back Hydrangeas Can Be Helpful

(1) All dead stems should be removed from hydrangeas every year.

(2) After the plants are at least 5 years old, about 1/3 of the older (living) stems can be removed down to the ground each summer. This will revitalize the plant.

(3) In addition, if it becomes necessary to prune a plant to reduce its size, it may be cut back in June or July without harming the next year's bloom. But it will return almost immediately to it's former size. This is one reason why it's best to plant a hydrangea where it does not have to be pruned.

Method I is for hydrangea types that bloom on old wood. "Old Wood" are stems that have been on the hydrangea since the summer before the current season. "New wood" are stems that developed on the plant during the current season. This group of hydrangeas produce flower buds on hydrangea stems around August, September or October for the following summer's blooms. If those stems are removed (pruned) in the fall, winter, or spring, the bloom buds will be removed, and there may be little or no bloom the following summer (usually June/July for the northern hemisphere).

Note that pruning is not the same thing as removing the dead blooms. (See below "Removing Old Blooms.") There exists a small group of mophead hydrangea that will bloom no matter when they are pruned. Endless Summer is this type of hydrangea. But for the vast majority of hydrangeas, pruning after July will likely result in fewer blooms the next summer.

EXCEPTIONS: For all mophead hydrangeas, the above method of pruning (Method I) will work very well. However, one may become confused when a neighbor or friend prunes his or her hydrangea at the "wrong" time, i.e. in the fall or spring, and then his hydrangea blooms just fine.

This method is used for hydrangea arborescens, smooth hydrangeas, and hydrangea paniculata (PeeGee types) hydrangeas. These types of hydrangeas bloom on new wood (new stems). It is a joy to grow these type hydrangeas because they are determined to bloom every single year, no matter how they are treated. The only time they cannot be pruned is in the spring ('Annabelle') or in the summer (PG) when they are preparing to bloom.

Many people grow hedges with smooth hydrangeas and cut them within a few inches of the ground each fall so they will not be an eyesore during the winter. They will still bloom beautifully in the spring/summer, however this drastic pruning may not allow stems to increase in size, and they may need staking to hold up the large heads.

Paniculatas (PG/Limelight types) can be pruned in the fall, winter, or spring. However, it is not necessary to prune them every year. It is suggested that one trim out crossing branches and those that do not contribute to an attractive form whenever necessary.

Gail, from Trussville, Alabama, has a beautiful blue hydrangea (actually she has several). The picture on the left, below, shows this hydrangea in early summer, at the height of its glory. As the summer progressed, it became increasingly loose, and the blooms were easily brought down in inclement weather.

Gail thought her hydrangea would be much more compact and attractive if it could be pruned. Unfortunately, it was still covered in bloom. If she waited until fall or winter to prune it, the hydrangea probably wouldn't bloom the following year at all. So, after we'd discussed the situation by email, Gail decided to prune it right then and there, since some of the bloom was starting to fade. The picture on the right was taken the morning Gail finished pruning. When I saw this picture, I gasped.

The summer after the pruning, this hydrangea was covered in bloom . But, I have to admit, it took a lot of nerve to pull this off. 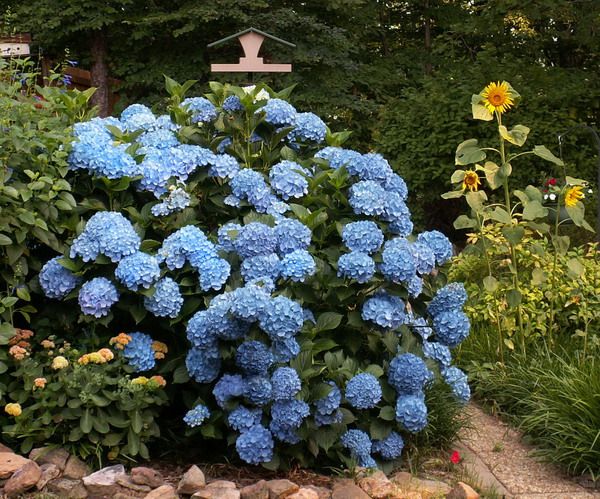 Removing old blooms on a plant is called "Deadheading." Fortunately, we can remove the old blooms at any time of the year without harming the bloom for the following year. In June and July you may remove them in any way you would like (long stems or short stems). Here are some tips for deadheading:

(1) When you cut blooms for arrangements in June or July, you can cut them with long stems because the bloom buds haven't set for the following year.

(2) When you cut the blooms after the first of August, it would be safest to remove them with very short stems so you won't disturb any developing bloom buds for next year. As long as you cut above the first set of large leaves, the blooms will be fine.