No matter which hydrangea you are growing, it is important to understand the watering needs of the plant. While they are known as being notorious for water, they do not like wet feet ever! The basic rule to tell if a hydrangea needs to be watered is by looking at the leaves. If the leaves are drooping, the plant more than likely needs to be watered.

When planting your hydrangeas, it is important to keep them watered until established then watered on a regular basis, especially during extremely hot weather or drought conditions. They should be planted in a moisture retentive soil that is well drained. You do not want to plant them in an area that has standing water, especially after rainfall. Hydrangeas in the ground should be watered at least 3 times a week when planted to help establish a strong root system. They have shallow roots so mulch is an absolute must! Use 2-3 inches of a hardwood mulch, (not the dyed red stuff) to help retain moisture, plus it will eventually breakdown and add organic matter to the soil.

You can also use drip feeders or soaker hoses in the landscape and they help get water to the roots which is the most important thing to do for hydrangeas. Depending on the type of hydrangea, it will require different amounts of water. Hydrangea macrophylla usually require the most water.  Hydrangea arborescens and hydrangea quercifolia typically require less water.

Here is an example of a hydrangea with the leaves drooping which needs to be watered immediately. Then the same plant only 3 hours later in the day after being watered. Once watered, the leaves perk back up and the plant starts to look much better.

Hydrangea That Needs To Be Watered 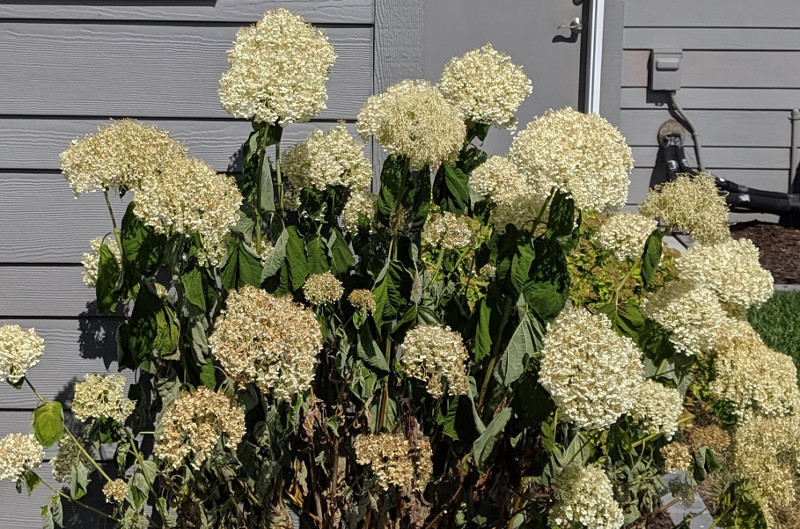 Hydrangea After Being Watered 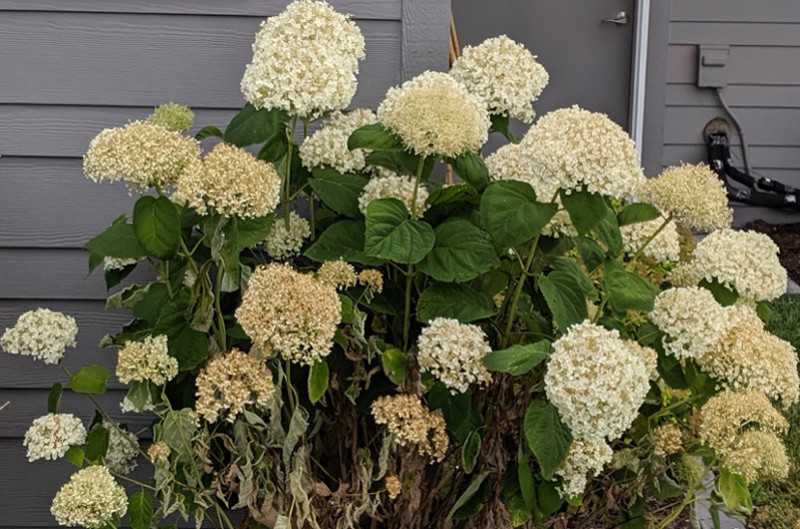 If you plant in a container outdoors, a light colored ceramic pot is best to help retain moisture. Dark colors absorb heat faster. Make sure there is a drainage hole! The hydrangea should be watered thoroughly at least 3 times a week. Always water the plant all the way around the container, not just in one place. Water should come out the bottom of the pot. Never let it sit in water which will cause the roots to rot away.

The same rules apply for hydrangeas grown indoors. Depending on your growing zone, you may be able to plant out a hydrangea you get for a special occasion such as Mother’s Day. Water them the same way but it is important for them to receive more light than if they were outdoors. Place them near a bright window in a cool room for optimum results. Do not allow them to sit in water.

They prefer at least 4 hours of morning sun that will allow the best color and flowers on the plant. If you live in Zone 7 or higher, you should make sure you have protection from the afternoon sun.

By proper watering you will have hydrangeas that will make the neighborhood jealous!

A little known fact about hydrangeas even though they are known as needing a lots of water, the “hydra” part of their name actually is referring to the their seed capsules which look like Greek water vessels. A little known fact to impress your gardening friends!

Other Considerations When Watering Hydrangeas

If you are using a liquid type of fertilizer and the plant is dry, water well at least 4-6 hours before fertilizing to prevent fertilizer burn. Use a slow release fertilizer whenever possible.

It is best to water at the base of the plants whenever possible to help prevent mold or fungus from growing on the leaves.