Free Shipping On All Orders Over $75 Today

Vinca is a genus of flowering plants in the family Apocynaceae. The flower is native to Europe, northwest Africa and southwest Asia. Vinca, commonly referred to as Periwinkle, is an evergreen perennial that blooms in the spring and summer. The name Periwinkle commonly applies to the genus species Vinca major and Vinca minor. We mainly sell the annual Vinca (Catharanthus roseus), a different genus within the family. Pruning tips for this genus are different from Vinca major and Vinca minor.

Catharanthus roseus is a low-maintenance annual flower that blooms from May to October. It typically does not require deadheading. Deadheading means pruning off faded flowers before their seeds mature. Annual Vinca does not need deadheading in order for it to continue blooming. You can prune the plant occasionally to boost blooming. This is as simple as pinching off the wilted flowers. 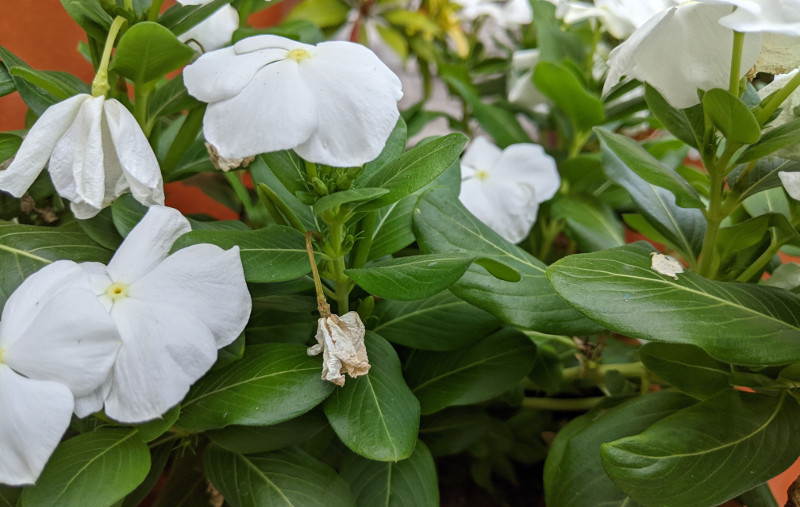 When to Prune Vinca

Vinca flowers bloom from May to October. Drastic pruning is not necessary as this plant is considered self cleaning. You do not have to remove spent blooms in order for the plant to rebloom. If you wish to tidy up the plant, you can pinch off spent blooms to encourage a faster rebloom time.This can be done anytime during the flowering season.

How to Prune Vinca

Vinca (Catharanthus roseus) is grown as an annual flowering plant with a bloom time from May to October. Light pruning can be done anytime during the growing season.

Grab the spent flower just above the next set of leaves and gently pinch it off.

Step 2 - Prune to thin out the plant.

Pinch off crowded areas of the plant allowing more sunlight to those areas, resulting in better blooming.

Step 3 - Prune to shape the plant.

Removing new growth at the tips of the Vinca helps it not become too leggy.

Why Do You Prune Vinca?

Typically, pruning a Vinca is not a necessary maintenance task for this plant as it is considered a self cleaning plant. You can always pinch off the plant to improve its appearance, as well as to encourage a bushier plant. Vinca is often used as a groundcover in landscape areas. Some gardeners will pinch off new growth so the plant does not become too leggy.

Pinching can also be done to thin out the plant. There are times when parts of the plant are not getting enough sunlight due to being too crowded. Thinning out the plant will allow more sunlight to reach those areas and help promote blooming.