This is an easy one....so easy anyone can do it! If you want moss for a covering in a pot or to transplant somewhere in your yard, it is so so very easy. All you need is a trowel and some bare dirt.

Step 1. Find a patch of moss. (If you don't have easy access to moss in your yard, you can buy moss and transplant it into a terrarium once it arrives. Random patches of moss can grow anywhere shady in the yard in all different varieties. Look around lawns and other shady areas to find a chunk. Just take a little...leave some there and it will replenish itself. If you want to feel really good about yourself, find a chunk of moss that has a bunch of weeds in it like this:

Dig up the moss and you can then easily pull the weeds out...a win-win...transplanting and weeding at the same time!  You want to target patches that have tough weeds like queen anne's lace, dandelions and quackgrass. 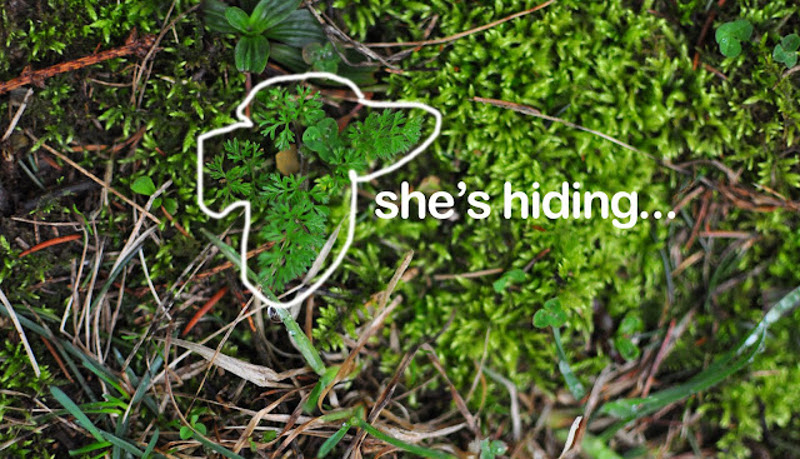 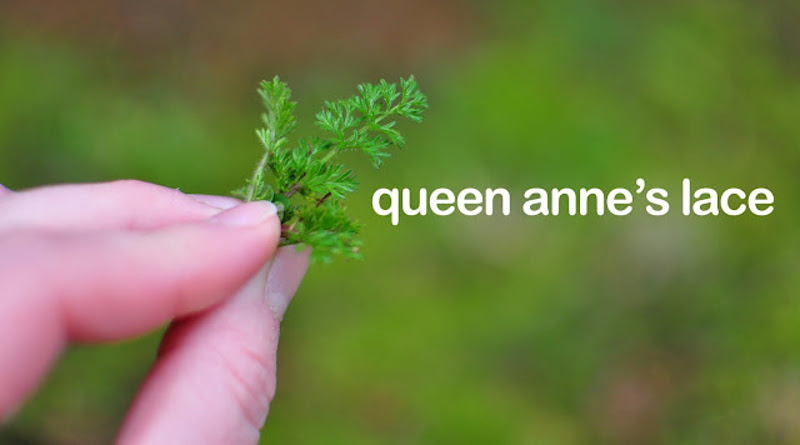 Step 2. Dig up a chunk of moss by slicing sideways under the moss, as opposed to digging down.  Moss does not have roots, so you are just going to slice off a layer of moss from the surface. You don't need a bunch of dirt from underneath the moss. 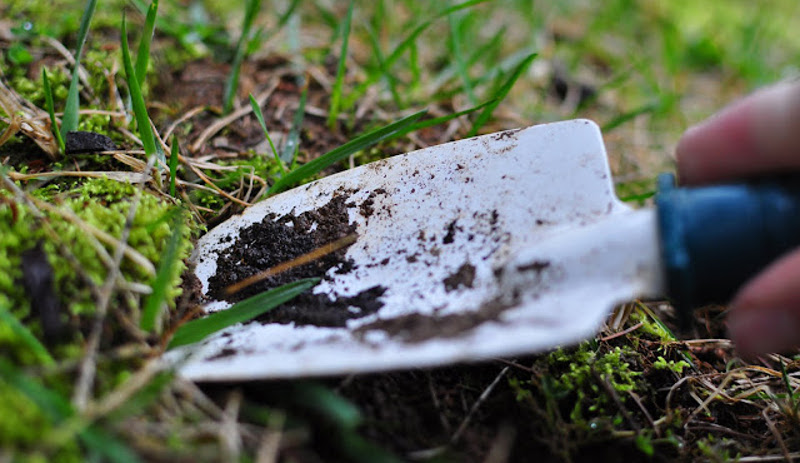 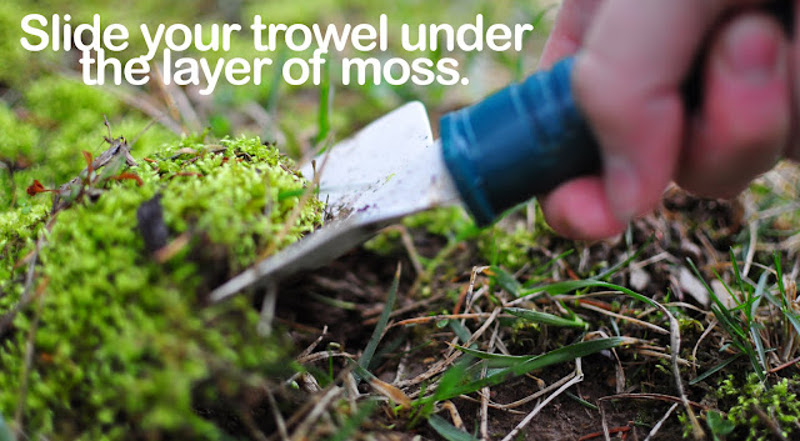 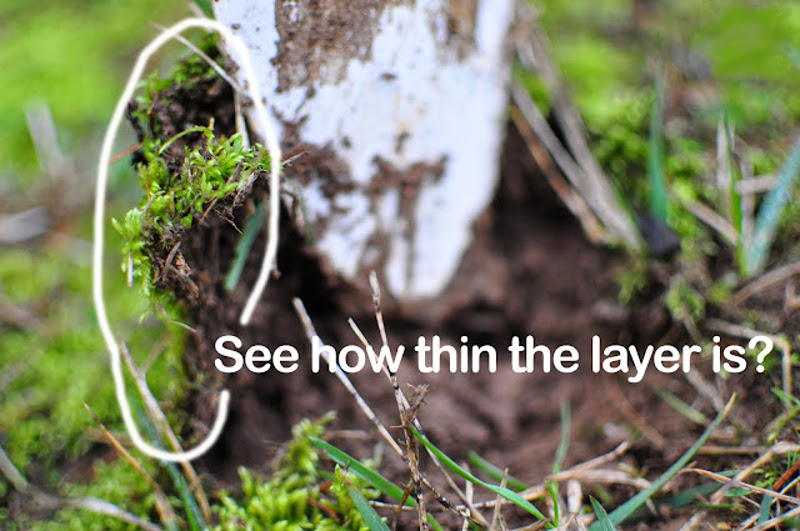 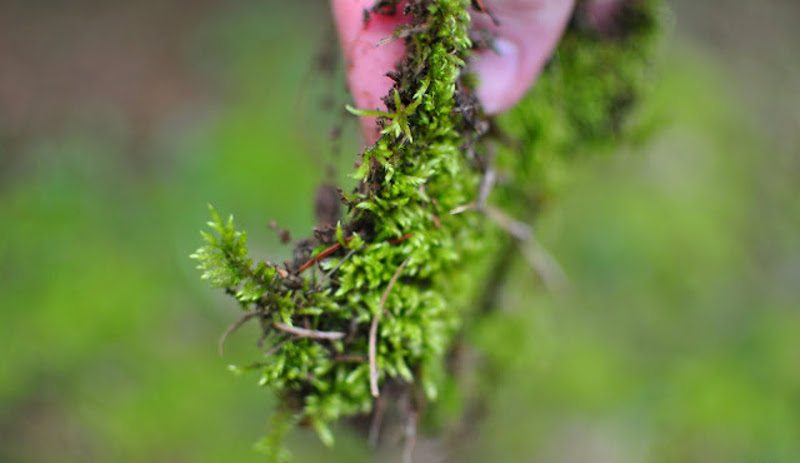 Step 3.  Once you have a thin slice of moss, you should make sure you pull out the weeds if there are any.  This moss mat had plenty.  This is what it should look like once it is cleaned up. 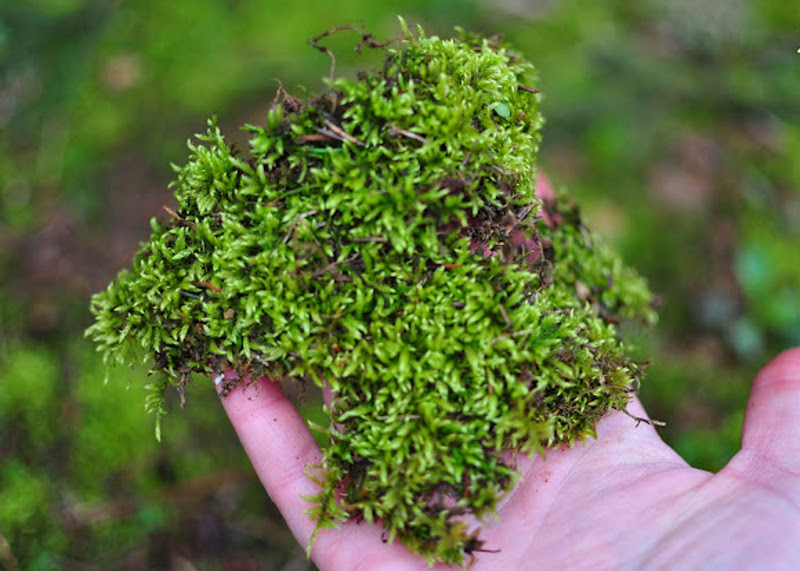 Step 4.  Now you need a surface with bare dirt to "plant" it on.  The moss need to have access to the soil and a bunch of water to establish itself.  Thus, this moss mat planted on a very rainy day.  Alternatively, you could just water your moss in, making sure it stayed moist for at least a week.  Moss prefers to be damp, so it is one plant you can go a little overboard as opposed to under-watering on the amount of water. 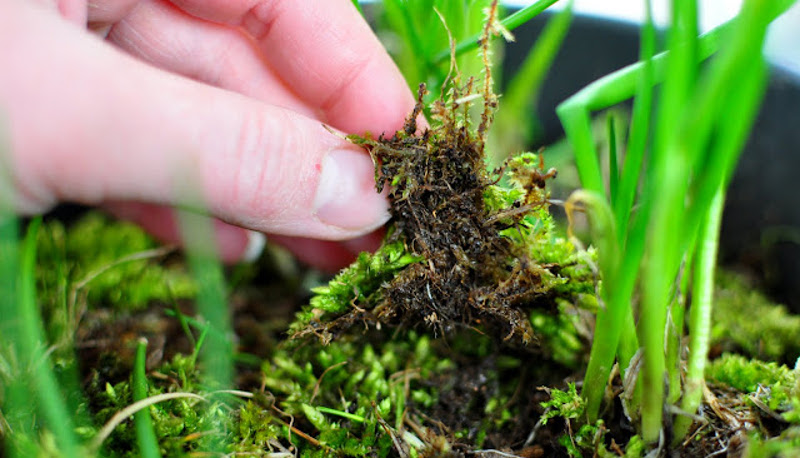 Step 5.  Give the moss a little pat to make sure the plant is in direct contact with the soil and you are finished! You want to pat down hard enough to remove any air between the moss and the dirt, but not too hard that hurts the plant and packs down the soil too much. That may hurt the moss from getting established. 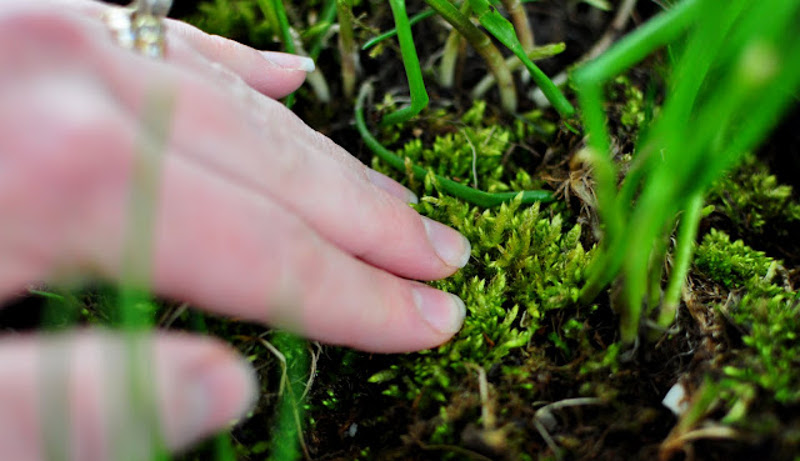 You can transplant moss all year. However, the best time is in the spring. Spring usually isn't as hot, and there is more rain that occurs compared to during the summer. So less stress on the plants, and less water you need to provide the moss.