Heucheras, once called alum roots, now more commonly known as coral bells, are adaptable easy-care perennials native to the United States, and have enjoyed an explosion of breeding and popularity in the last twenty years.  In the Saxifragaceae family, the basal foliage resembles ruffled lettuces, and dainty bells rise on stalks called a thyrse, creating a candelabra effect. There are hybrid heucheras for sun or shade, in a rainbow of colors including lime, rust, bronze, silver, purple, and near black in solids and variegated varieties. 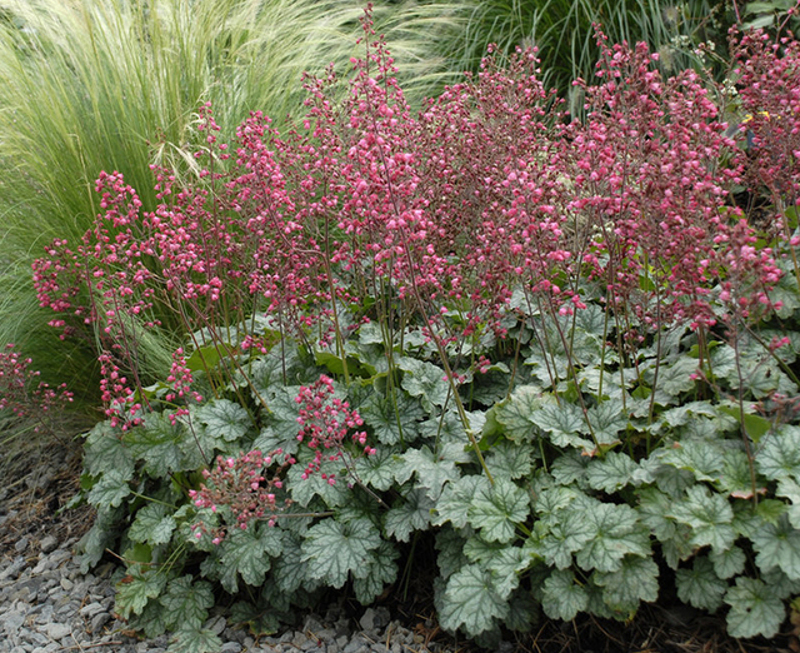 Hardy from zones 4-9, in warmer areas they retain that stunning color adding winter interest. Foliage can be six to 18 inches tall, with flowers up to two feet. The flowers, in white, pinks, and reds, are usually secondary to the foliage, but some cultivars offer showier flower displays. They tend to be disease-resistant, and unattractive to deer and rabbits.

The Difference Between Heuchera, Heucherella & Tiarella

Heuchera - also known as Coral Bells or Alumroot, are native to the United States, and are treasured for their impressive, bold colors of both the flowers and foliage. The leaves are most often maple-shaped leaves.

Tiarella - or sometimes called "foamflower", is also native to North America, specifically the eastern to mid-western parts. These plants like more shade and can tolerate more moisture than heuchera.

Heucherella - also called Foamy Bells, is a hybrid cross between the Heuchera and Tiarella plant, combining the bold colors of the Heuchera with the disease resistance of the tiarellas.

Choose a spot with the appropriate sun level for your variety. Most prefer partial shade. Some are tolerant of full sun, while others suffer leaf scorch in the same conditions. In colder climates, they can take more sun if watered well. The ideal soil is well-drained, moist, with a pH that is neutral to slightly acidic. H. sanguinea and its cultivars tend to prefer neutral loam to acidic clay soils. Plant the crown at soil level or slightly above. Freeze/thaw cycles in spring can cause the crowns to heave out of the ground; mulch well in winter to prevent this, or replant gently and cover lightly with compost in spring. Divide clumps as needed every three years or so.

Coral bells need to be well watered the first couple of years in the garden to establish their roots. Their roots are shallow, so they need extra care during dry spells or heat waves. An inch of water per week should be sufficient. It’s best to water the soil rather than the leaves to prevent sun scorch; if you are not hand-watering, you can also water early in the morning. Established plants are fairly drought-resistant. 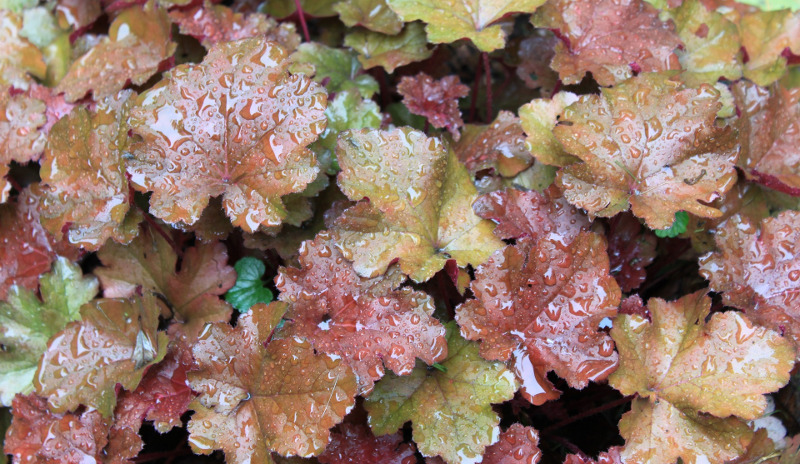 Heucheras are light feeders, so a dressing of compost in fall and spring should suffice for plants grown in the ground. In containers, a yearly spring application of slow-release fertilizer is recommended.

Heuchera needs little in the way of pruning. You can promote new blooms by removing old flower stalks down to the base. In spring and fall, clear and remove any spent foliage, especially if you see signs of rust, in which case discard without composting. Divide clumps as needed every three years or so.

Caring For Coral Bells in Pots

Coral bells are wonderful container subjects, because of their shallow roots, their potential for year-round color, and ease of care. Choose a well-draining soil mix and plant the crown at or slightly above soil level. Give plants slow-release fertilizer at planting time and yearly in spring, as well as a dressing of compost. In winter, protect from cold winds and rain, and stop watering while they are dormant.

Top-dress the soil with compost in the fall, remove and dispose of any diseased foliage, and mulch crowns well to prevent heaving out of the ground after freezes. In early spring, trim off brown foliage. If growing in containers, protect from cold winds and rain, and stop watering while they are dormant.

Is Heuchera Evergreen Or Deciduous?

Heuchera is evergreen plants, though, in some colder climates, they may lose some of their leaves during the winter months.

Once established, Heuchera is somewhat drought tolerant, though they prefer moist (but not soggy) soil. While they can also tolerate full sun, they'll do better in partial shade, with the colors of both the foliage and the flowers at their optimum with between 4-6 hours of sunlight.

Why Are My Coral Bells Dying?

By far, the most common reason coral bells don't survive long term is overwatering. They are very prone to stem rot. Coral bells prefer sandy, well draining, moist but not wet, soil and keep mulch away from the crown of the plant.

Do Coral Bells Come Back Every Year?

Coral bells are perennials and do come back every year. They can also be brought inside for the winter and grown as a houseplant!

How Do You Take Care Of Coral Bells In The Spring?

Early in the spring, all brown foliage should be trimmed from your coral bells and if they're in containers, keep them protected from the cold wind and rain.

If the brown leaves are appearing on newly planted coral bells, it may be just an adjustment to the new home. If they are established plants, brown leaves may be indicative of stress (heat or water) and may be due to salt damage from too much fertilizing.

Coral bells do spread a bit, but not quickly. They may need thinning out after 3 or 4 years.

When Do Coral Bells Come Back?

Coral bells will emerge in the spring, when the temperatures warm.

While coral bells prefer and will do better in, partial sun, they will tolerate both full sun and shade.

How To Landscape With Coral Bells?

Coral bells are very versatile and can serve in many ways as interest in your yard, with many varieties and colors. They're perfect to use as edging, in mass plantings, or as container plants that can then come indoors as a houseplant over the winter!

What Is The Growth Rate Of Coral Bells?

Coral bells are moderately fast growers and are best thinned or divided every 3 or 4 years. If they begin looking a bit rough, you can trim them back in the spring, and they will quickly fill back in with new growth.

Have a question about Coral Bells? Fill out the form below and we will try and get back to your question as soon as possible. We may even feature your question on this article to help other gardeners!