St. John’s Wort is also known by the scientific name Hypericum. While the native plant, Hypericum perforatum, is considered a healing herb, many ornamental cultivars have been developed with larger flowers, colored foliage, and brighter berries than the native variety. These cultivars are easy to grow and fairly low maintenance for the home grower. There are even a few cultivars grown specifically for their long-lasting berries for the floral industry. 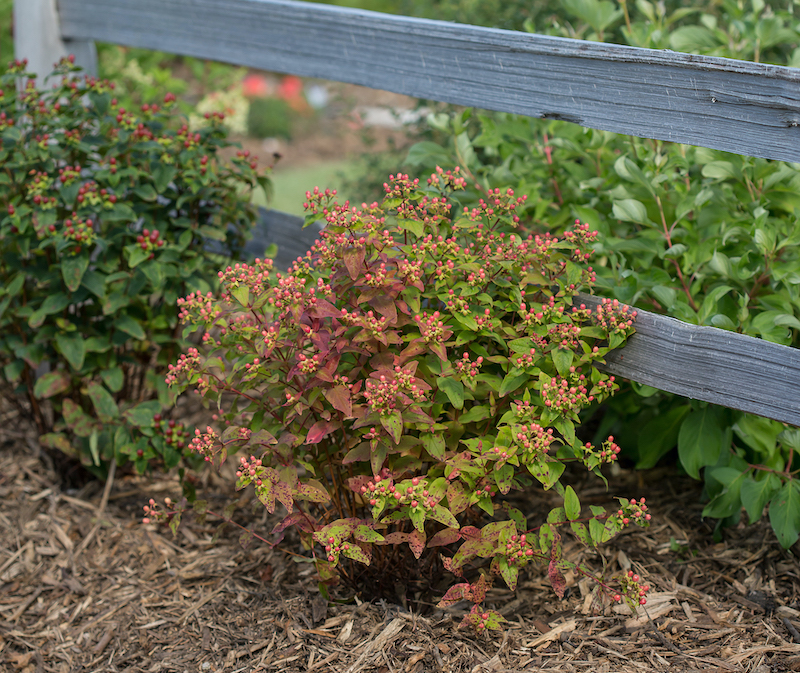 What You Need To Plant St. John’s Wort

Where to Plant St. John’s Wort

The ideal location for St. John’s Wort is in full sun with free-draining soil. It is not particular about soil pH and tolerates slightly acidic to slightly alkaline soils. This shrub works well as a ground cover, an edging plant in front of borders, and in hard-to-plant areas like along driveways, public sidewalks, or on sloped areas. 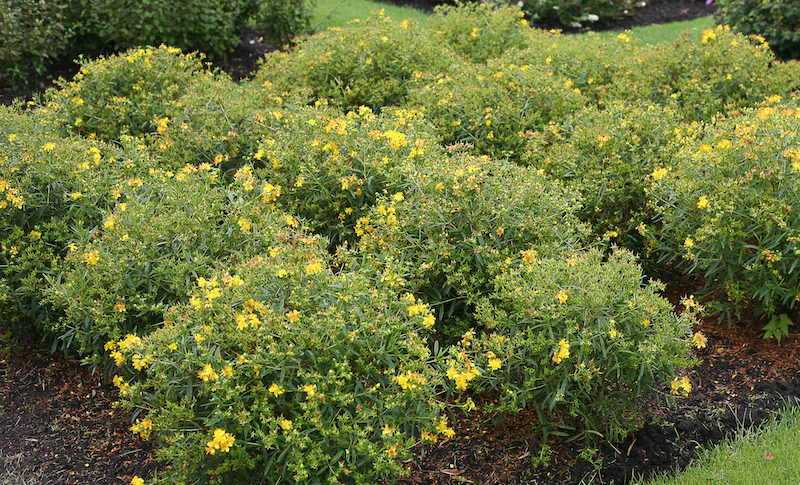 St. John’s Wort spreads quickly and is susceptible to fungal rust disease if the plants do not receive good air circulation. Space this shrub farther apart than other shrubs of their size. The mature width can be anywhere from 2-4 feet, so space these shrubs 4 feet apart on center. St. John’s Wort spreads but is a compact grower that does not need extra staking or support to keep its upright shape.

The root system of St. John’s Wort is fibrous and does not disrupt foundations or sidewalks. The groundcover varieties can quickly take over a garden if not pruned back on a regular basis. Their woody branches will root easily if they come in contact with the soil. This is referred to as air-layering and is the easiest way to propagate St. John’s Wort. 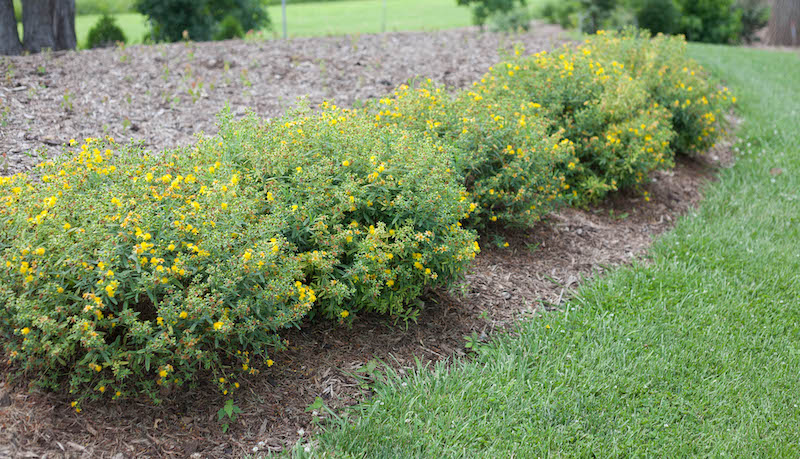 Step 1 - Dig a hole that is twice as wide and the same depth as the pot the plant was grown in.

Step 2 - Remove the shrub from the pot and gently tease the roots loose if they have begun to circle the pot or the plant is rootbound.

Step 3 - Place the plant in the hole so that the root ball is even with the surrounding soil.

Step 4 - Fill the hole in with soil and gently firm the root ball in place to remove any large air gaps.

Step 5 - Water the newly planted shrub in well, long enough that some of the water sits on top of the soil.

Step 6 - Allow the water to fully soak into the soil and then place a thick layer of mulch around the base of the shrub, about 2-3 inches in depth.

Step 7 - Prune off any damaged branches and/or foliage to clean the shrub up and encourage new growth.

When to Plant St. John’s Wort

The best time of year to plant St. John’s Wort in the garden is in early spring after the last chance of frost has passed in the colder growing zones. This allows the roots to establish fully throughout the growing season. Planting this shrub in the late summer to fall is best for the warmer gardening zones. St. John’s Wort behaves as a semi-evergreen shrub and establishes easily in the fall when supplemental irrigation is usually not necessary.

Planting any shrub or perennial in the early morning will lessen the chance that the plant will suffer from transplanting shock. The cooler temperatures of the morning reduce the rate of transpiration through the leaves. Planting on overcast days also is a great idea.

St. John’s Wort is a shrub and therefore not able to be divided like a perennial plant. The best way to propagate St. John’s Wort is by air layering the stems. Try this early in the summer while the new growth is still green and hasn’t started to become woody. Find a non-flowering branch and gently bend it down and press it into the soil so that the stem has full contact. A sod pin or even a rock can be placed over the stem to hold it down. Keep the area well watered for the rest of the summer. After a while, new roots will begin to grow from the layered stem, forming a new plant.

The plant can be separated from the original plant and potted up in a container before planting the following spring. Sometimes this process can be slow and will result in a new plant after one or two seasons. Alternately, seeds of St. John’s Wort grow easily and can be sowed in trays after the last frost of spring, seedlings can be transferred to pots through the summer, and new plants can be planted in the garden the following spring.

St. John’s Wort can easily be moved to a different location in the garden any time during the growing season. Supplemental watering will be needed for the rest of the summer until the shrub begins dormancy in the fall.