St. John’s Wort is a hardy ornamental shrub that can be grown from zones 4-9. The clear yellow flowers in the early summer are followed by highly ornamental red berries that stay on the shrub throughout the winter. Some varieties of Hypericum are native to the United States, and others are exotic and considered invasive in certain areas.

St. John’s Wort is most often used to grow in hot, dry areas that other plants cannot: covering a hillside, along the driveway, or alongside a public sidewalk. Full sun and poor soils suit St. John’s Wort. Growing this deciduous shrub in soil that is high in fertility will encourage dense foliage growth and inhibit flower and berry production. 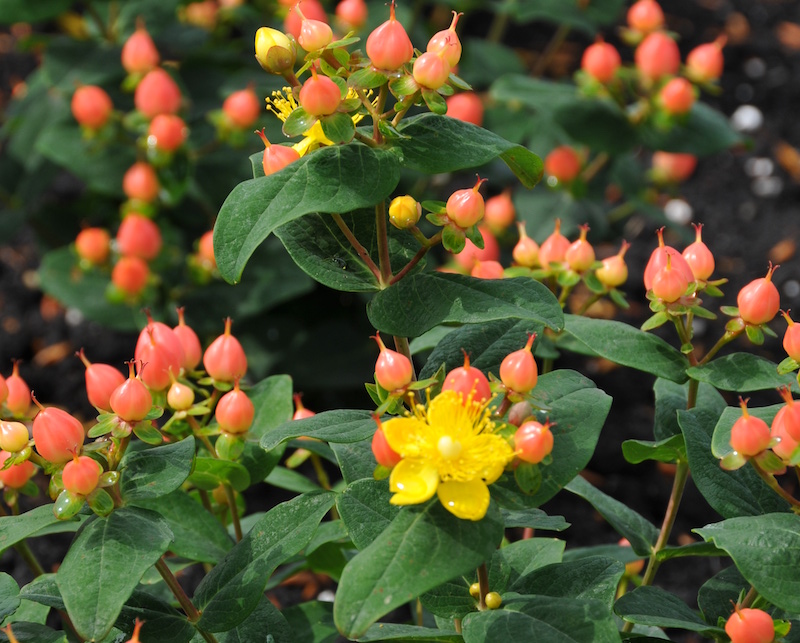 Choose a planting site in full sun to partial shade that has well-draining soil. The plants will need to be planted at the same depth that they were grown in their pots. Dig a hole twice as wide and as deep as the pot. Backfill the hole with the native soil and gently firm the root ball in the hole, making sure to get rid of any air pockets. Fertilizing at the time of planting is not necessary. Mulching with organic compost will help retain moisture in the soil and slowly provide nutrients during the growing season. Do not forget to water the new plant very well. This will also help to get rid of any remaining air pockets around the root ball. 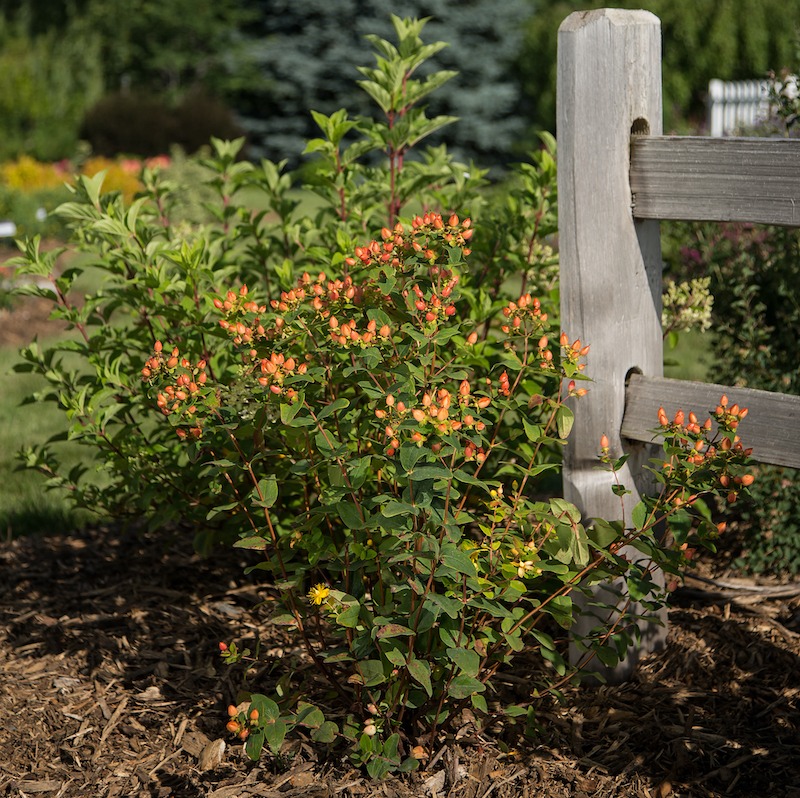 St. John’s Wort is a drought tolerant shrub after it has been established fully. Supplemental watering will be needed in the first year. Water shrubs infrequently for longer periods to encourage their root systems to grow deep in the ground. Watering with a drip irrigation system or soaker hoses will get the water right where it is needed, at the roots. This type of watering helps to keep foliage dry and less prone to fungal rust and mildew diseases.

After St. John’s Wort matures, supplemental watering may not be needed depending on where you garden. If you garden in an area that gets regular rains in the summer, then extra watering may result in too much moisture and root rot. Gardeners in areas with hot, dry summers should check moisture levels every week to 10 days until regular seasonal rains start in the early fall. 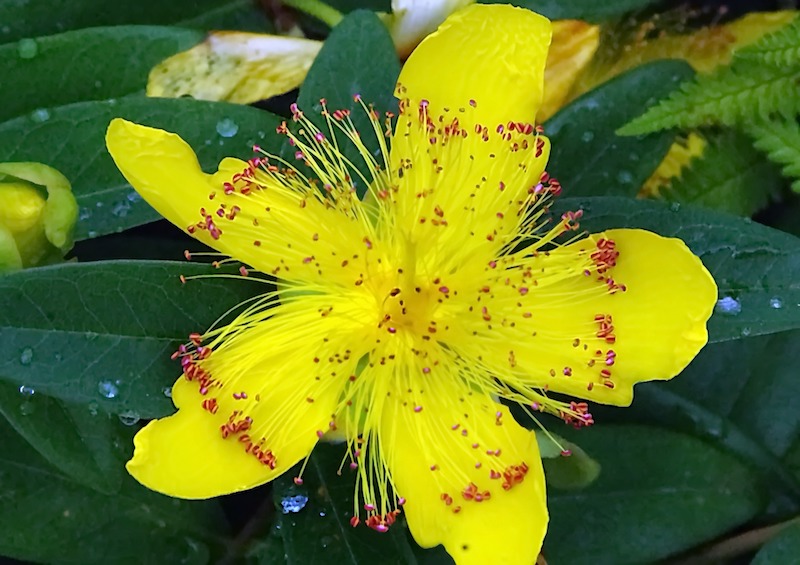 St. John’s Wort will grow in lean soils low in nutrients. Because they are not heavy feeders, there is no reason to fertilize St. John’s Wort when it is growing in the ground. Applying a 2-3 inch layer of organic compost as a mulch will support most of the growth in this shrub. As the compost decomposes during the season, the nutrients will evenly feed the soil and the plant.

St. John’s Wort will need regular feeding if it is grown in a container. Watering slowly leaches minerals out of the potting soil, and the nutrients will need to be replaced. Using a diluted liquid fertilizer that is formulated for blooming shrubs and perennials will provide the right balance of N-P-K for profuse blooming and heavy fruiting.

Annual pruning in the early spring will help keep this shrub compact and blooming well. St. John’s Wort blooms on the current season’s wood, so this shrub will benefit from regular cleanup in the spring. Any damaged, diseased, dying, or diagonal branches should be cut back all of the way to the main stem. Rejuvenation pruning can also be done early in the spring.

If the shrub has been neglected for a while, the branches may have gotten leggy with all of the flowers appearing at the tips. A hard cut-back to within ⅓ of the overall size will restore dense foliage and flower growth.

St. John’s Wort grows well in containers and can be the backbone of an ever-changing seasonal mixed planter. The flowers last for a long time in the summer, while the berries persist right through the winter. Supplemental watering and fertilizing will be needed to keep this shrub looking its best. When the container is dry 2-3 inches below the soil, it is time to water.

Make sure to water long enough that water comes out of the drainage holes. This indicates that all of the potting soil has been saturated. Fertilize with a diluted liquid fertilizer once a month until August. Feeding shrubs and perennials past late summer will disrupt the dormancy process.

Hardy shrubs need little attention during the winter months. St. John’s Wort does not need pruning before the winter. Allowing the plant to keep its berries and stems will help to insulate the growing crown from harsh winter temperatures. Wildlife enjoys eating the nutritious berries throughout the winter, and the pop of red in a yard helps brighten the winter garden. Monitor the drainage in the garden or container. Poor drainage forces the root to spend too much time in cold, waterlogged soils. Root rot is one of the main reasons that St. John's Wort might not survive the winter.

Yellowing leaves result from many causes, including nitrogen or iron deficiencies, insufficient light, waterlogged soil (the roots of plants need oxygen to grow), or dehydrated soil.

All St John's Worts are easy to grow and tolerant of a wider range of conditions, including temporary flooding.

How Much Sun Does St. John's Wort Need?

Choose a sunny location, one that receives at least 6 hours of sunlight per day.

How Long Does It Take St. John's Wort To Bloom?

The blooming season for St. John's Wort starts in mid-summer and typically lasts for up to 6 weeks.

Should St. John's Wort Be Deadheaded?

Since this shrub blooms on the current season's growth, spring pruning will not reduce flowers or berries. Do not deadhead St. John's Wort if you want the berries to form. However, if you would like to prevent self-seeding, remove all the spent flowers before they set seed.

Why Is My St. John's Wort Turning Brown?

Some cultivars of St. John’s Wort are vulnerable to mildew and fungal diseases. If you notice any diseased foliage, prune out the affected branches as soon as possible to keep the disease from spreading through the plant or to neighboring plants.

St. John’s Wort is considered to be toxic to children. The berries and flowers contain the chemical Hypericin and will cause the same photosensitivity as in other animals, along with digestive issues and stomach upset.

Some varieties of Hypericum are native to the United States, and others are exotic and considered invasive in certain areas.

Is St. John's Wort An Annual Or Perennial?

St. John's wort is classified as a shrub but is generally treated as a woody perennial.

What Is The Growth Rate Of St. John's Wort?

Hypericum Patulum has a height of 2-4 feet and a spread of 2-4 feet. It is a fast grower and performs better if given a bit more space when planting.

John's Wort has average water needs and is relatively drought-tolerant. It can tolerate most types of soil, but prefers moist soil with very good drainage

Have a question about St. John's Wort? Fill out the form below and we will try and get back to your question as soon as possible. We may even feature your question in this article to help other gardeners!