Purslane is pretty distinct. It has paddle shaped leaves, a little shiny, succulent-like and a reddish stem. It grows anywhere (and everywhere) and is considered a weed in some places. It is also considered a delicacy, garnering up to $7.00 a bunch at a farmer's market. Call us crazy, but we'll take the free stuff growing in our gardens over the 'gourmet' bunched option. There are annual and succulent varieties of purslane or portulaca also available. All of these are edible plants. The flowers, buds, seeds, leaves, and stems are all edible. However, most people just eat the stems and the leaves. The leaves are the best part. 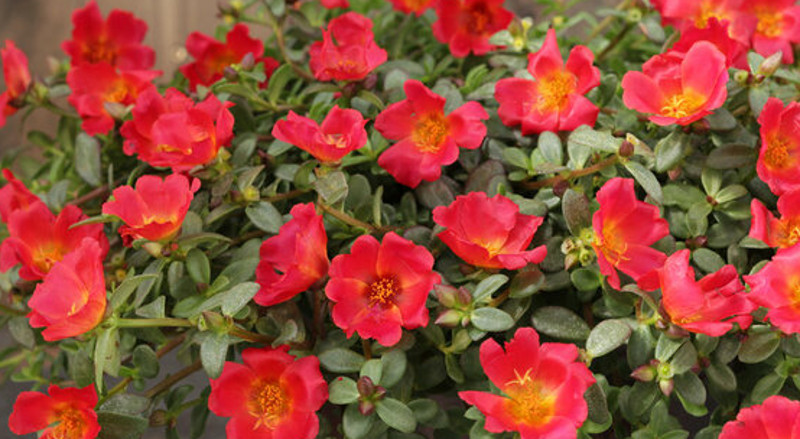 The leaves are what you want to eat for purslane. You can eat them raw or cooking them (more on that below). The leaves have a slightly sour taste, kind of like spinach or watercress. Sometimes the plant is described to have a faint citrus undertone or hint of lemon. The texture is crunchy, juicy and tart.

The danger in eating plants is that you have to be certain you know what you are eating. Be sure to research and make sure you have purslane and not another similar looking plant. After researching, test a leaf first. Just one leaf. Just in case. After 24 hours with no problems, you can eat a few more leaves. If you still have no issues the plant is clearly edible and you've just scored some high priced purslane from your backyard!

Warning - Purslane has one evil twin called spurge. There are various types of spurge, but what you must really look out for is "milky sap". It looks like it sounds, thin white sap that oozes out of the stems when the plant is broken. This sap will irritate your skin (similarly to poison ivy) and will make you very sick - don't eat it! They don't look very much alike purslane, but sometimes people do confuse them. When in doubt, watch out for the sap. Purslane has very clear sap that is more gel like (similar to aloe or other succulents).

On to the cooking. Purslane can be eaten raw in salads or chopped up into a fresh pesto. You can also cook purslane. It doesn't take much to cook the plant, but you can steam the leaves or give it a light sautéing. Try eating it in a stir-fry or in tacos! We recommend to only cook for a little bit and not overcook the plant. You can also use purslane in soups for a unique flavor addition to the broth.