Purslane, often called Portulaca, is a drought tolerant flowering plant that is often grown as a low maintenance annual. The low growing plant can be a spiller in containers, or grows as a groundcover in the garden.

Purslane can be grown as a groundcover, even in vegetable gardens. The plant helps reduce weeds growing between your plants. You can also grow purslane as a container plant or in rock gardens. This hardy plant is typically grown as an annual, but can be grown as a perennial in warmer climates, especially in the southwest part of the United States. Some of our favorite plants to grow with purslane in rock gardens or in containers are sedum, hens and chicks, angelonia and calibrachoa. 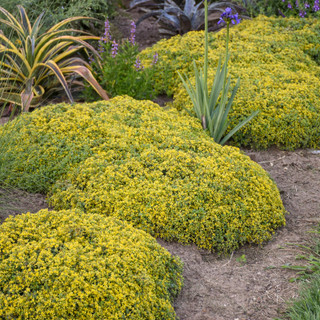 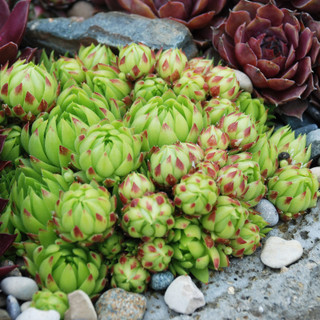 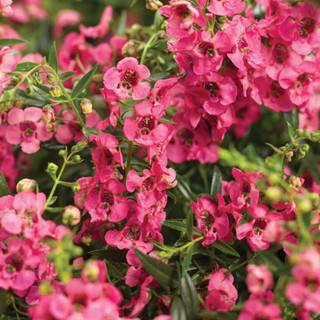 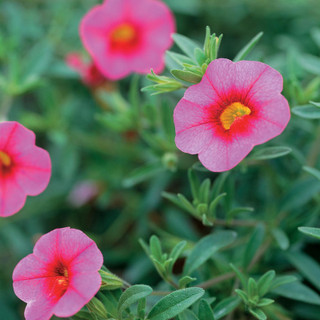 Is Purslane Portulaca a Weed or Edible?

Purslane can grow in pavement, between rocks, and in moist conditions. It spreads from seed or from pieces of stems. And a purslane can have more than 50,000 seeds per plant. It re-roots after being hoed. That’s a weed, right? Still, many value purslane because it is edible. But in my mind, if the plant interferes with the objectives in managing a lawn or garden, it’s a weed. And since mats of purslane suck moisture and nutrients from soil and even shade soil from sun as they spread, they’re pretty much weeds in my book. That’s especially true in a vegetable garden, where I don’t want a weed competing for precious water. 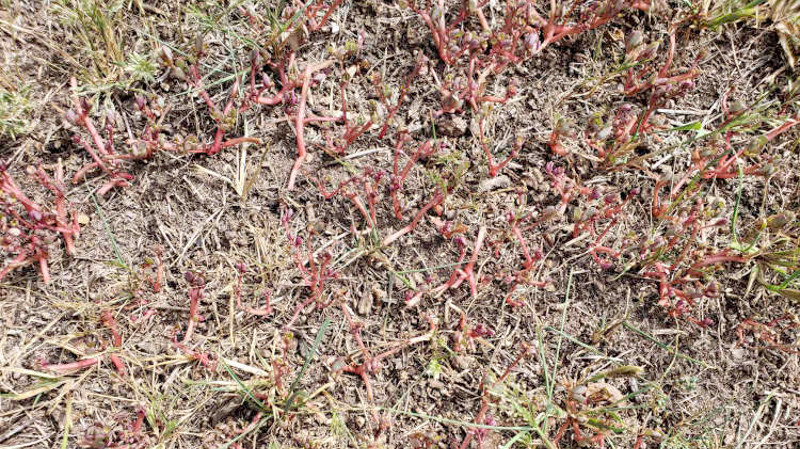 Close-up of fading, sort of mowed purslane; it’s returned to its reddish color.

Purslane was grown in India originally and provided nutrition and reported health benefits. Those who eat purslane have described its taste as lemony or similar to spinach. And the plant tastes best if “harvested” while its fleshy leaves still are young. So one way to eradicate common purslane where you don’t like it is to follow the philosophy “If you can’t beat ‘em, eat ‘em.”

You can spot common purslane as a small seedling with reddish-tinged leaves that form flat against the ground and spread out like spokes in a wheel. Pull it up before it sets seed to avoid having an entire bed full of the weed the next year.

Even common purslane can be pretty. The fleshy leaves contrast nicely with tiny, usually orange, flowers. And I bought one years ago before I knew better. I paid for that, because the plant came back with a vengeance, choking out other plants in a tiny rock garden. So if you choose to plant purslane as an edible, just beware that you’re introducing the seeds to your landscape. 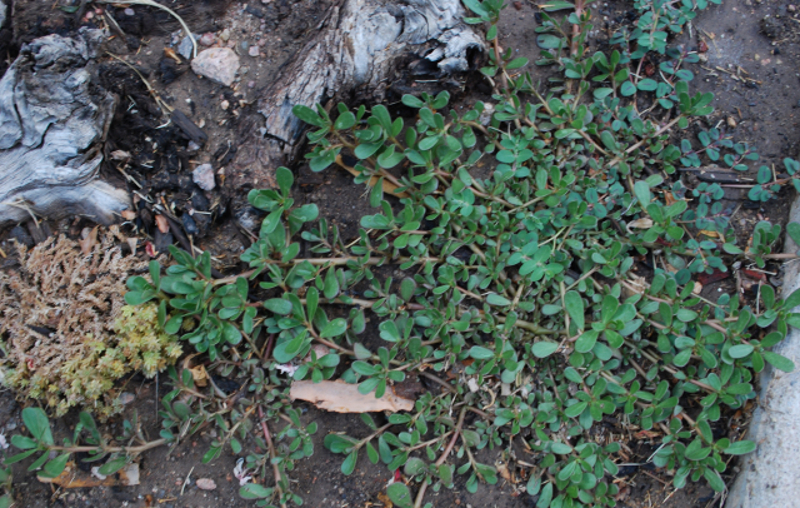 Purslane taking over a rock garden. It’s best to pull it up before it gets this big, whether you eat it or throw it out. 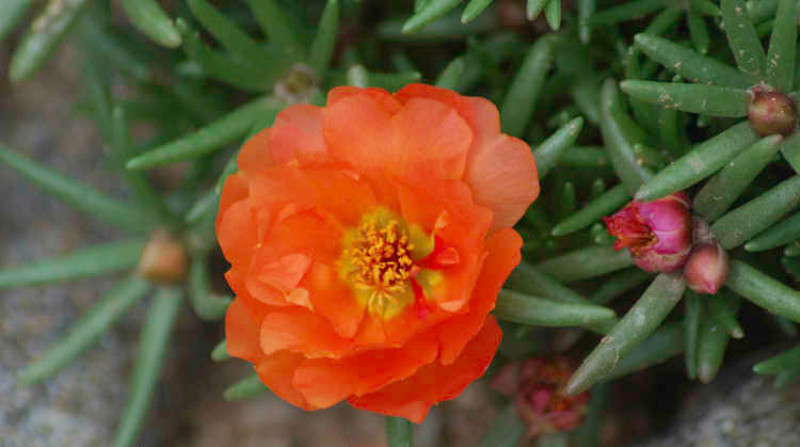 The best part? Portulacas love sun and heat, are highly drought tolerant, and will spread in warm climates to make an interesting groundcover. They’re also a perfect container plant, especially if you buy a mix of colors. Both purslane and portulaca bloom in the morning after the sun has been up a few hours, and later in the day. 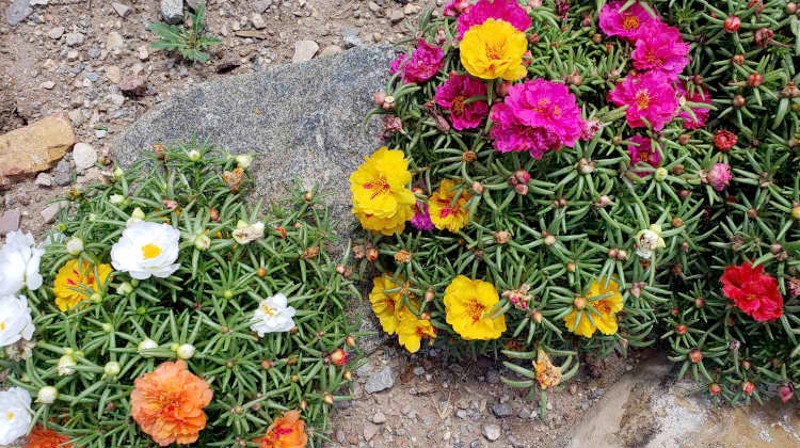 Here is an ornamental purslane in a container that is flowering. This is a great way to enjoy the pretty delicate flowers but not having to worry about spreading through a flower bed or garden. 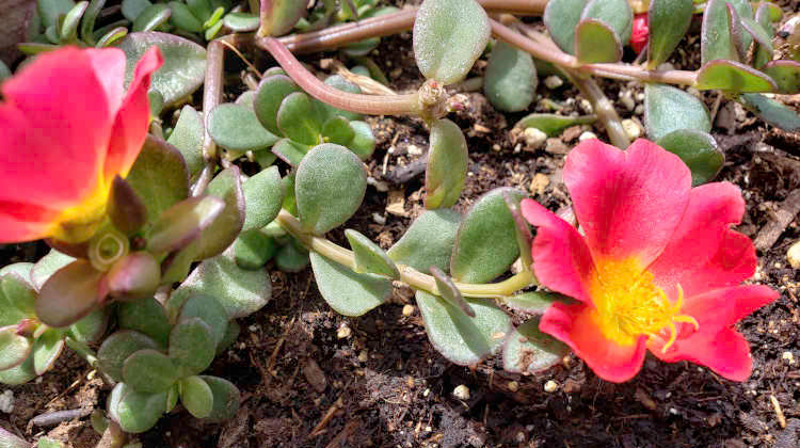 Ornamental purslane in a container arrangement. The flowers are striking.

And it’s a good thing I kept the purslane contained. We had a really strange weather year. Our grass emerged later than usual, and we were overtaken with two prostrate weeds: goatheads and purslane. 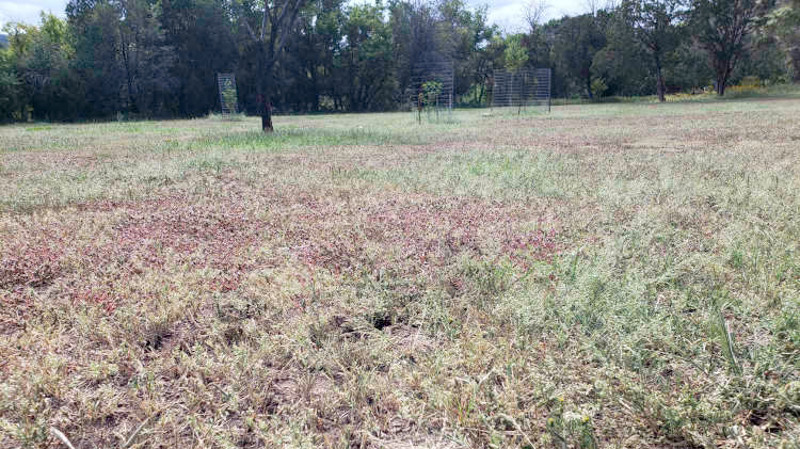 With moderate drought, this grass is not as green as it should be. But note the reddish-brown bare spots. Yep, that’s fading purslane.

I don’t know if the lack of grass around the dead purslane was the reason the purslane is so heavy in some areas, OR whether the hardiness of the purslane in our recent conditions simply covered the ground and choked out native grass in many areas. Either way, it is difficult to get rid of the purslane and the goatheads in a large lawn because they are too short to effectively mow, and too numerous to hoe.

I’ve grown to accept that some invasive plants (aka: weeds) are not so bad. I’m still on the fence with purslane (Portulaca oleracea), a prostrate spreading succulent that can take over entire flower beds. 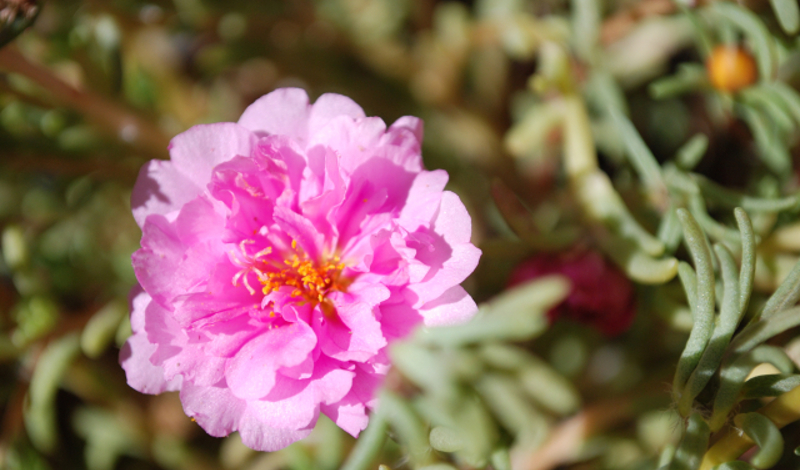