Crape Myrtle is an easy-to-grow perennial with a tree-like look that produces beautiful flowers. This plant tends to keep a good shape naturally and requires very little pruning, but with minor work, you can tidy up the appearance and help the plant produce an abundance of flowers. Less is more when it comes to pruning Crape Myrtle. Removing too many branches can stunt the growth and prevent the plant from blooming. This practice is known as Crape murder.

Knowing how to prune Crape Myrtle correctly is important because flowers grow on new branches. Find out how maintenance pruning will keep your Crape Myrtle looking amazing all summer long. 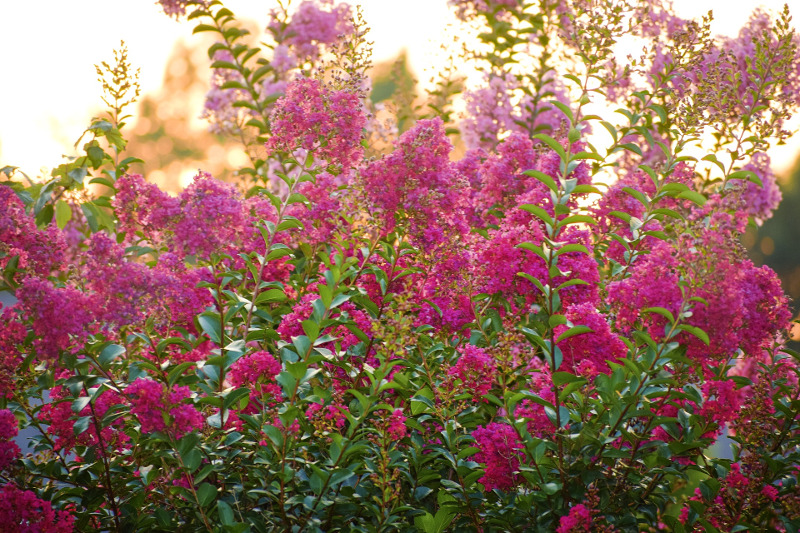 When to Prune Crape Myrtle

Flowers grow on new branches, so trim and shape the plant in the early spring before the new growth starts to fill in. It is best to prune Crape Myrtle while the plant is still dormant. Some gardeners prune their plants in the fall. The benefit of pruning in the spring is that if the plant sustains any damage during the winter, that damage and any overgrowth can be removed at the same time. Pruning the plant once before the growing season starts can save time, and leaving the overgrowth in place may help insulate and protect the shrub during the winter.

Prune and shape the shrub to resemble a tree when the plant is dormant. Major pruning should not be done during the growing season as this can stunt the growth and give the Crape Myrtle an unattractive appearance. Remove dead or damaged growth at any time during the spring and summer. Severely damaged branches can be pruned back during the fall or winter.

Trimming or pruning Crape Myrtle can shape the plant and give it a more desirable and tidy appearance. Generally, it is best to remove lower branches and growth when pruning a Crape Myrtle. This plant naturally produces several main stems or trunks. Leaving all this growth in place will create a crowded canopy and potentially limit growth. Removing some of the trunks forces the plant to put all of its energy into the remaining sections, which will grow larger and fuller.

Crape Myrtle also naturally produces shoots or suckers, which are small branches that grow from the base of the trunk and roots. Removing the suckers cleans up the appearance while allowing the plant to refocus its efforts into new branches and flowers.

Crepe myrtles in the South are tall, multi-stemmed trees. North of Maryland, where cold, wet winters kill them down to the ground more often, they are grown as shrubs that get whacked down to nothing each winter and grow back from the root system or whacked low trunks each warm season. Some trunks die back on less cold tolerant cultivars here in VA, but for the most part they only lose a few limbs around here every 4-6 years or so in colder winters only.

What is Crape Murder?

Correct tree pruning is always done in the proper order of priority (knowing when to stop and leave an actual healthy tree behind, not “crepe murdered” celery stalks with no branches): remove all dead, dying (heavily diseased or physically damaged), banging, close crossing, close parallel, then some innermost inward growing branches. Last is any aesthetic shaping, which is the very first thing most people do.

You want to remove things that hasten the overall death or sectional stress decline if a tree, leaving a longer living, healthier specimen with fewer damaged,diseased or pest infested material in it. Because the tree spends less energy fighting decay or pests, then it can spend more energy on proper new vegetative and floral bud growth.

People whack crepe myrtles to death for two reasons: to cut off the seed heads (which fall out on their own when shaken anyway later in the winter) or to make them ridiculously smaller than the genetic potential of the tree wants them to be (meaning they were plants in too small of a space to begin with). Some people whack them to bring the mostly top facing flowers lower to human sight lines instead of mostly bring higher then the average pedestrian looks. 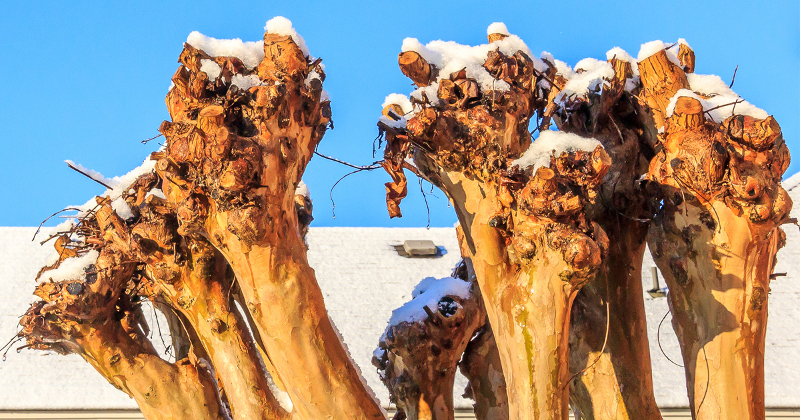 Limited pruning maintains the plant's natural shape and keeps the Crape Myrtle healthy. It is best to remove lower branches, so the shrub only has a few main trunks. This practice also naturally thins out the canopy. A severe pruning, especially to the upper limbs, will stunt the growth and is known as Crape murder.

This practice will force the plant to push out new growth on the lower portions of the shrub. Limited upper growth and an abundance of lower overgrowth create an unsightly appearance, and since flowers appear on new growth, the plant may not produce as many striking blooms. It can take a plant years to regain a balanced look and get back into a regular bloom cycle.

How to Prune Crape Myrtle

Step 1 - Only prune Crape Myrtle when the plant is dormant.

Shape and trim the plant during the fall or early spring before new growth appears.

Step 2 - Stand back and look at the plant.

The shrub should have a tree-like look with a few central trunks. Identify which branches to keep and which to remove.

Cut smaller trunks and any shoots all the way back.

Step 4 - Dead or damaged growth can be removed at any time.