If you live in a colder climate with a short growing season – generally the northern third of the country – you will have more success with cool-season grasses. Cool-season grasses actually can be more colorful during cooler weather and usually need some extra water during periods of drought. States just below the middle of the country (from southern California to North Carolina and Virginia) live in a transition zone and often can try both grass types.

Many warm-season grasses also look great in winter in colder regions. They develop "flowers," which really are seed heads. Unless the grass is invasive in your area, you can leave those heads on for a touch of silver, tan or pink color and movement in winter. Just check the hardiness zone to see if your grass will survive winter frosts.

Consider how much water an ornamental grass needs when you plant it in a container or plant a large group as a border or mass planting. Remember, too, that most turf grasses grow by runners, or rhizomes under the ground. If you choose one of these grasses for ornamental use, you might have to control growth or plant it in a container. Others form clumps and do not invade other plants.

Acorus. Also called Golden Variegated Sweet Flag, Acorus gramineous 'Ogon' has rich golden leaves that is semi-evergreen. It grows in zones 5 through 11 to a height of about 10 inches.

Arundo (Arundo donax). Commonly called Giant Reed grass, Arundo is a warm-season ornamental that blooms in fall with purple stems. It can be invasive.

Andropogon. This warm-season ornamental grass also is called Big Bluestem. It grows in zones 4 through 9 and the thin grass blades can reach 4 to 6 feet high. The grass turns from blue-green to reddish in fall.

Carex. More commonly called sedge, several pretty warm-season Carex grasses can work in a landscape. Evercolor Everillo Carex provides year-round interest in 12- to 18-inch high clumps. Evergold Sedge has bright yellow leaves with green edges; it is gorgeous as a container plant, growing to about 16 inches high. Bowles Golden Gold Sedge has fine yellow-lime green blades that cascade from its center. It rises to nearly 3 feet high. Check the zone for each variety. 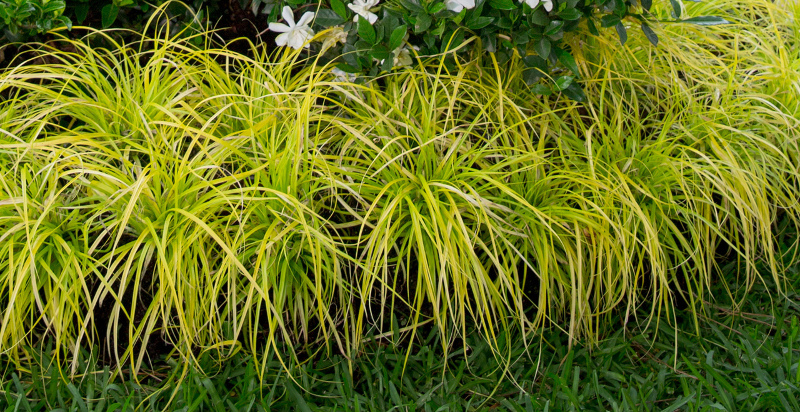 Chasmanthium. This native (Chasmanthium latifolium) has common names like oat grass or wild oats. It grows 2 to 4 feet high and is a warm-season, low-maintenance grass. It sends up blue-green leaves followed by graceful ivory seed heads.

Hakonechloa. H. macra, also called  Hakone grass, is a full-sun loving warm-season grass. 'All Gold' Japanese Forest (or Hakone) grass has gold blades that cascade from the center, reaching only about 14 inches high. Aureola Golden Variegated Japanese Forest Grass is a few inches taller and adds pretty, cascading texture to a garden with its thick gold and green leaves.

Miscanthus. Usually called Maiden Grass, Miscanthus varieties have blue-green foliage that grows in a vase-like shape. It develops silver-colored seed heads late in the season. Adagio Maiden Hair is hardy in zones 5 through 9 and grows to nearly 5 feet high.

Ophiopogon. Usually called Mondo Grass, Ophiopogon grasses are cold hardy to zone 6 and can take some drought. The grasses grow on tubers and in clumps that can spread as a groundcover. Mondo Grass is nearly 15 inches high, with dark evergreen leaves in most parts of the U.S. Dwarf Mondo Grass grows to only about 6 inches high and wide with evergreen foliage.

Panicum. Switch grass (P. virgatum) is native to Missouri and grows well in zones 5 through 9. It can handle poor soil and drought and attracts birds to its flowering heads. Prairie Winds Apache Rose Switch Grass turns pink and tan in late summer and grows to nearly 4 feet high. Prairie Winds Cheyenne Sky Switch Grass is much shorter, topping out at about 1 foot with deep blue leaves in summer and wine-colored leaves in winter.

Schizachyrium. You've probably heard of this grass, more commonly known as Little Bluestem. This native to North America is tough and hardy in cold and marked by narrow blue-green leaves. Prairie Winds Blue Paradise Little Bluestem reaches about 3 feet high and has wine-colored seed flowers in fall, looking stunning when you plant several in a row.

Sporobolus. Often called Prairie Dropseed; Plains Indians would grind the seeds of Sporobolus to make flour. The tiny, showy leaves form a nice mound of color in zones 3 through 8.

Calamagrostic acutiflora. Commonly called Karl Foerster Feather Reed grass, this cool-season ornamental is one of the most versatile. It thrives in zones 4 through 9 and does best with temperatures around 70 degrees. The flumes turn feathery as fall approaches, for a tall (4 to 6 feet) plant to sway in winter breezes.

Fescue, or Festuca. Blue fescue are cool-season grasses that grow as clumps of icy-blue leaves and can thrive in sun or light shade. They have deep roots that help them tolerate drought. Blue Whiskers Blue Fescue is about a foot tall and a tough ornamental grass with a rounded form, perfect as a container filler. Beyond Blue Fescue Grass reaches a similar height, but spreads to only about 18 inches around, compared with more than 24 inches for Blue Whiskers. The compact and cold-hardy perennial can add winter color to edgings or mass plantings.